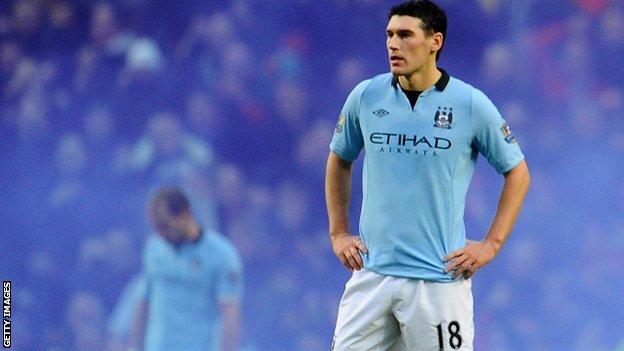 Barry, 31, received a one-match ban after fourth official Clattenburg, who was recently involved in an incident with John Mikel Obi, took action.

"I don't understand why Clattenburg said these things," said Mancini.

"I don't know if it comes from this problem with Chelsea."

Clattenburg was involved in a dressing-room confrontation with Chelsea's Mikel in October following the Blues' game against Manchester United.

The official was cleared of any wrongdoing, while Mikel was banned for threatening behaviour, but Mancini suggested the incident may have influenced Clattenburg's report.

"Every referee and fourth official should understand if a player said one inappropriate word at the end of a game, when they have lost in the last second," added the Italian.

"This was another situation to Chelsea. He said Barry said something to him. I don't know what it was.

"But Gareth is a serious guy and he said he doesn't remember saying any inappropriate words to Clattenburg."