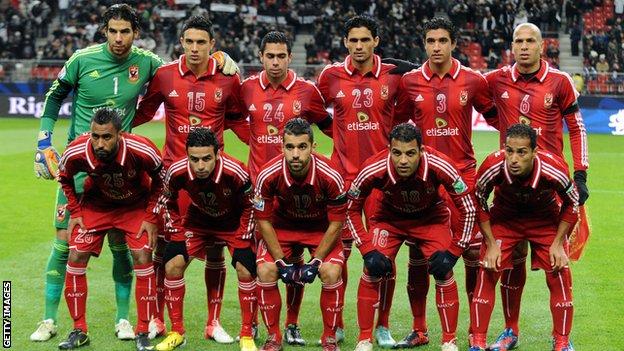 A year that began with violence and bloodshed will end in pride for one of the world's biggest clubs.

Egypt's Al-Ahly have won more than 100 trophies, including Africa's top club competition a record seven times, but events in 2012 have ensured this year an indelible place in the club's rich history.

It began with recriminations after a match at Ghazl Mahalla was abandoned following a pitch invasion by home fans.

But that was forgotten, just a month later, after 72 Ahly fans were killed in Egypt's worst football disaster.

After the team was beaten 3-1 away by El-Masry of Port Said, home fans rushed on to the field and attacked Ahly supporters with knives and guns.

The players witnessed deaths inside their dressing room, where some of the injured fans were taken for treatment. Ahly's iconic player, Mohamed Abutrika, held a fan in his arms as he died.

Winning the Champions League so soon after the Port Said disaster shows the character and positive attitude of this club. Port Said was just another point towards the destiny of this club - to be great no matter how difficult that is

Many Egyptians suspected that the security authorities were behind the deaths, as revenge for the part that the Ahly hardcore - known as the Ultras Ahlawy - played in Egypt's 2011 revolution. The authorities have always denied the accusation.

The tragedy resulted in an immediate suspension of the league, which Ahly were leading at the time. No top-level league matches have taken place in Egypt since.

But Ahly still had African Champions League commitments, including a match against bitter Cairo rivals Zamalek.

They came through all of them, playing behind closed doors when they were in Egypt. Despite having no other competitive football for 10 months, they won the trophy by beating Tunisia's Esperance in the final and qualified for the Club World Cup.

For Asad, the founder of Ahly's Ultras, the club's achievement was born out of the tragedy.

"The motivation of the players was to do something to reward the memory of the victims of Port Said and somehow we ended up winning the whole thing, which in itself is an amazing fairy tale," he told the BBC's World Football programme.

While Chelsea will play Corinthians in the final, Ahly will have a third-place play-off against Mexico's Monterrey.

"These sort of disasters change the club. It will never be the same but it brings people together.

"Winning the Champions League so soon after the Port Said disaster shows the character and positive attitude of this club. Port Said was just another point towards the destiny of this club - to be great no matter how difficult that is."

Ahly's 2-1 win over Japanese champions Sanfrecce Hiroshima in the quarter-finals was the first match that the Ultras had attended since Port Said.

They have boycotted the handful of matches that Ahly have played in Egypt and say they will continue to do so until a verdict is reached by the inquiry into the tragedy.

As well as providing a much-needed financial boost, finishing third in the Club World Cup as champions of Africa will be represent an end-of-year high that seemed impossible as fans lay dying on a football pitch 10 months ago.