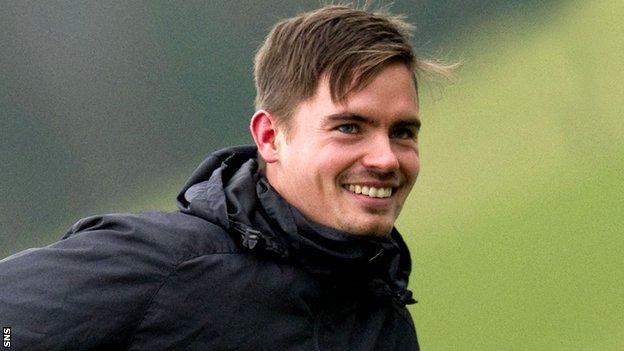 And the Swedish international says that it is important that the club tie the forward down to a new contract.

"It's important he stays, he's scored a lot of goals in the past year," explained Lustig.

"He's a really good footballer, he's got a great touch - in the box he's real good, probably one of the best in the UK at the moment."

Hooper, 24, signed a four-year deal at Celtic Park in July 2010 and talks about new terms opened in May, with manager Neil Lennon confident the player will stay on.

With Celtic in the last 16 of the Champions League, Lustig thinks that will make it easier for the club to retain their top stars.

"I think every player will want to play in the last 16," he said.

We are going to be underdogs whoever we get, although on paper Malaga could be a good draw for us

"It has been a long journey to reach that goal and now we are here I think all of the players would like to stay."

Looking ahead to next week's Champions League draw, Lustig said he hoped Celtic were paired with Juventus, who were his boyhood heroes.

"I was a big Juventus fan when I was growing up but I don't know why," he said.

"I don't think they are going to win the Champions League but they are obviously the best team in Italy right now and they should be disappointed if they don't reach the semi-final.

"We are going to be underdogs whoever we get, although on paper Malaga could be a good draw for us.

"We were probably underdogs in every group game and we handled that pressure quite well."

Lustig also revealed that the reaction in his homeland to Celtic's progress in the Champions League has been "massive".

"When we reached the Champions League a lot of the media in Sweden said that Celtic is probably the team that shouldn't be there because they saw the first leg against Helsingborg and they weren't much impressed with that.

"Over two legs I think we were the stronger team but the first half in Helsingborg was really bad.

"Now they have seen that we are a really good team and work good together."

Lustig admitted that Europe had been the priority for the team, who will be looking for their first home league win since 7 October when they face St Mirren on Saturday.

"When you play a game you always want to win, but of course you're thinking a lot about the Champions League games.

"So now it's real nice to focus on the SPL.

"We have some problems when teams come here and are defending and we haven't found the keys to break them up."