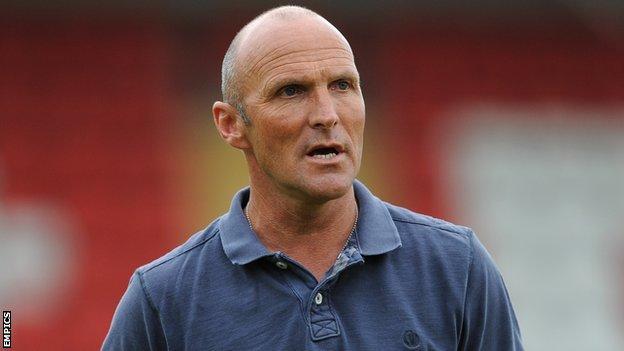 Kidderminster Harriers manager Steve Burr is proud of his record in non-league football.

But, after two sixth-placed finishes in the Blue Square Bet Premier, followed by this term's feat of lifting his side from bottom to seventh, Burr makes no secret of his one burning ambition.

"The one thing I haven't achieved as a manager is to take a team to Wembley," he told BBC Hereford & Worcester.

"And it is something that burns inside me to do."

This Saturday's FA Trophy second round trip to Bromley, conquerors of Kidderminster's neighbours Worcester City in the last round, is the Harriers' next test (15 December, 15:00 GMT).

Harriers in the FA Trophy

And, although last Saturday's 3-2 win over Blue Square Bet Premier leaders Newport was the climax of a stunning run of just one league defeat in 15 games, Burr warns that Saturday's second round opponents Bromley must be taken very seriously.

Bromley have already disposed of one Worcestershire side in knockout action this season, Worcester City, in the first round of the the FA Cup back in early November.

And Burr, who led his team to the semi-finals three years ago in his first season in charge, is very keen that the 1987 Trophy winners should not go the same way as Worcester down in Kent.

"It's a tricky tie for us," added Burr, who is without the suspended Kyle Storer.

"They're struggling with their league form. But we know their lads will be right up for it.

"They've got a lot of players who are experiences at Conference Premier level and, if we're not right, we can get turned over.

"This is what the Trophy is all about. It's the non-league FA Cup," added the former Nuneaton Borough, Hucknall Town, Northwich Victoria and Stalybridge Celtic boss.

"But we'll be the favourites, we've aspirations ourselves to make progress in the competition, we've done our homework on Bromley and we've had them watched over the last couple of weeks."