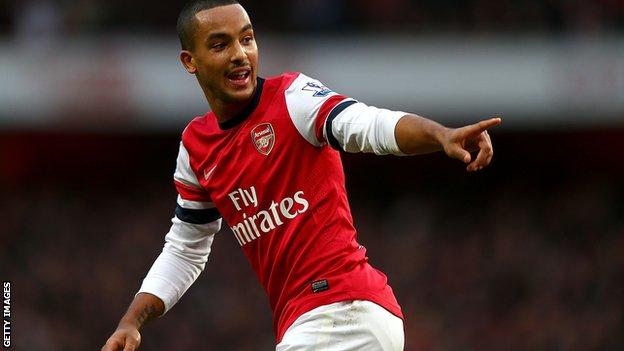 Theo Walcott's contract dispute with Arsenal is set to continue into the new year, despite Gunners boss Arsene Wenger issuing a Christmas deadline.

Walcott has so far rejected Arsenal's attempt to re-start formal negotiations but talks are expected to resume.

The England forward, 23, could sign a pre-contract agreement with a foreign club from 1 January or join a Premier League side for free in the summer.

Liverpool, Chelsea, and both Manchester clubs have indicated an interest.

"We want him to stay, I always said exactly the same. We are all professional and let's hope we can extend his deal. I speak to Theo of course, we are always in touch with them [his agent] and you have to give us some time to try and sort that out."

"There is urgency, how much I don't know, but there is urgency. We want to sort it out before Christmas, one way or the other. I would not like to [sell Walcott]. I have not even thought about that, because at the moment I think we will still manage to make a deal with him."

"My desire is to keep Theo. We do what is needed to keep him and hopefully we can sort this situation out very soon. Very soon is before the end of December one way or another, that is for sure."

Wenger said he does not want Walcott to leave in the upcoming transfer window, even if that opens the possibility of him departing for nothing at the end of the season.

But the Frenchman made similar suggestions about Samir Nasri and Robin van Persie as they entered the final year of their contracts, only to see them sold to Manchester City and Manchester United respectively.

Liverpool are keen to recruit Walcott in January, Chelsea and Manchester City would rather wait until the summer - unless he is put up for sale in the new year - and Manchester United have asked to be kept informed.

City pursued Walcott last summer and had a bid rejected before the transfer window closed.

Walcott's preference is to stay with Arsenal if they meet his wage demands and offer him opportunities to play as a central striker having spent most of his Gunners career on the wing.

Walcott may choose to delay his decision until the summer, at which point he would know how the season had materialised for both himself and Arsenal.

But it is understood the main reason negotiations have not recommenced is the player's anger at being relegated to the substitutes' bench after he turned down the improved contract.

Although Walcott has started each of the last five matches he has been available for, earlier in the campaign he started just three of 13 matches when fit.

He is Arsenal's top scorer this season with 10 goals in 17 appearances and when asked on Friday if Walcott would be a part of the club's long-term future, Wenger replied: "I believe so, yes."

Arsenal signed the then 16-year-old Walcott from Southampton in 2006 for an initial £5m rising to £12.5m. He has scored 30 goals in 161 league appearances for the club and has 30 caps for England.