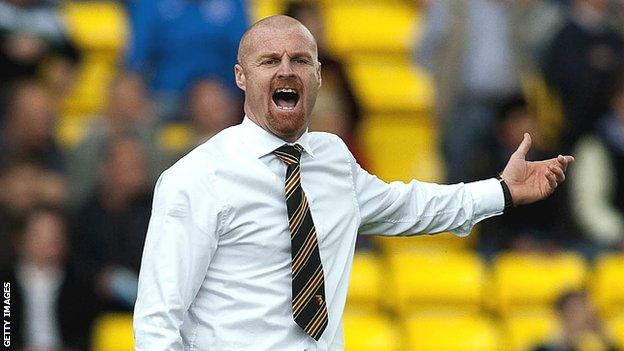 Sean Dyche says he holds no malice towards Watford as he faces the club that controversially dismissed him in July for the first time on Saturday.

Dyche guided the Hornets to their best finish for four seasons in 2011-12, but was and replaced by Gianfranco Zola.

The Burnley boss told BBC Radio Lancashire: "It's gone, it's the past and I'm looking towards the future.

I had a good time there, I enjoyed it and it was a big part of my progress, as well as we hope we rubbed off some good things on the club

"The whole feel of the place has changed radically since I was there."

Burnley host Watford on Saturday, having won three of their eight matches under Dyche.

Since Zola's appointment at Vicarage Road in July, Watford have signed 16 new players, 12 of them on loan from Udinese and Granada, clubs also owned by the Pozzo family.

Dyche continued: "I think they're carrying 40-plus players, so most of the players I worked with are still there.

"It's just a different way of doing business. It's not for me to decide whether it's right or wrong, it's for them and their fan base to decide."

The 41-year-old began his managerial career with Watford and he hopes to use his experiences there in his new role at Burnley.

"I've had good links with most of the clubs I've been at," added Dyche.

"It's slightly different at Watford because I went through the system as player, coach, assistant manager and then manager.

"I had a good time there, I enjoyed it and it was a big part of my progress, as well as we hope we rubbed off some good things on the club."