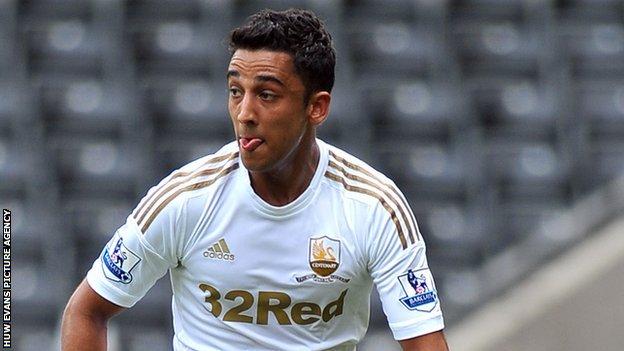 Defender Neil Taylor is delighted with a new three-and-a-half-year contract that keeps him at Swansea City until June 2016.

Welsh international Taylor, 23, will take no further part this season after suffering a badly broken ankle in September.

But the Swans rate the player so highly that they increased his previous deal with a one-year extension.

"We spoke about a new contract before I broke my ankle," said Taylor.

"But when something like that happens you do wonder what will be.

"But in fairness to the chairman [Huw Jenkins] he text me the day after the injury and told me not to worry about the contract.

"Full credit to the club, they have been as good as their word.

"Both myself and the club are happy with it."

Taylor joined the Swans from Wrexham in June, 2010 and has gone on to repay the club's faith.

Before the injury against Sunderland on 1 September, Taylor had established himself as one of the brightest of young Welsh stars.

He added: "I see my long-term future here; everything is right for me.

"I love the style of football, the area and the fans, who have been great to me. And, more importantly, my family is happy here.

"The club is still on the rise. To reach the dizzy heights of seventh or eighth in the Premier League is amazing, especially when you consider where the club was just seven years ago.

"And our position in the table is no fluke, because it's December, not August.

"The fans can see all this for themselves because they've been here a lot longer than me.

"I'm convinced we'll still be in the Premier League next season.

"For a club like ours to have three consecutive campaigns at this level will be an unbelievable achievement.''