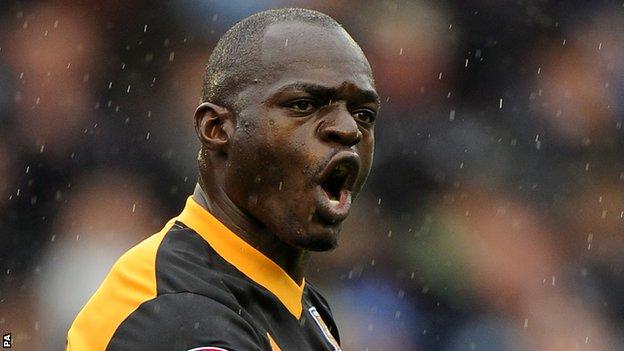 Abdoulaye Faye's header saw Hull condemn Derby to only their second home defeat of the season and put the Tigers level on points with leaders Cardiff.

Hull captain Robert Koren's strike opened the scoring against the run of play in the first half.

Derby struggled to turn possession into chances but responded just before the interval through a stunning volley from midfielder Michael Jacobs.

But Faye converted from a corner to give Hull a fourth successive win.

The result boosted Hull's record as the best team on the road in the Championship and put them two points ahead of Crystal Palace, who face strugglers Huddersfield in the late kick-off on Saturday.

Derby began the brighter at a misty Pride Park, with midfield talent Will Hughes's continuing his excellent start to life in the hosts' first team as he helped dictate the play in the early stages.

Chances were to remain at a premium all night for Nigel Clough's men, however, and their lack of incision was punished by Slovenian Koren as he volleyed in from 15 yards after some excellent wing play from Stephen Quinn.

Derby excelled with the ball at their feet, but their exquisite equaliser came from a set-piece after Jacobs hammered home a meek clearance from centre-back Faye from the edge of the penalty box in first-half injury-time.

Stung by his part in the leveller, the Senegal international responded in perfect fashion after the break as he nodded in a devilish corner from Manchester United loanee Robbie Brady.

Buoyed by the appearance from the bench of top scorer Theo Robinson with 10 minutes to go, Derby pushed for a late goal but the resolve of Steve Bruce's side was rewarded with their seventh win from 12 Championship away matches.

Derby manager Nigel Clough: "We're delighted with it [the display] again, we can't ask for any more effort from the players. It's not just effort as well, they are playing some great stuff at times.

"He [goalscorer Michael Jacobs] looked a threat when he was on the pitch and it's good to see him grow, along with the other young players like Jeff Hendrick and Will Hughes. Hopefully they will continue to grow together.

"Hull will be right up there come the end of the season and that's why we are so pleased with how we played against them, there was nothing between the two teams tonight."

"We were 33/1 [for promotion] at the start of the season so we've come under the radar a bit, which is what I wanted.

"Hopefully we can keep it going but, as I say, much will depend on what happens with the loan players. This was our fourth straight away win and to win four on the road in this league at this time of the year is terrific."