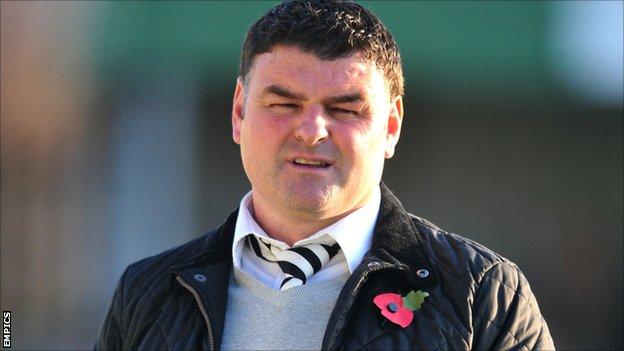 Ian Bogie has said he hopes to return to football management as soon as possible following his departure from Gateshead after six years in charge.

Bogie led the club to two consecutive promotions, and established them as play-off contenders in the Blue Square Bet Premier before Wednesday's exit.

"I've had a great grounding, I'm still young at 45," he told BBC Newcastle.

"I'm young and ambitious and if a club out there wants to move forward I'm definitely interested."

Bogie added: "I had opportunities before to speak to one or two league clubs when things were going well, but I'm still learning the game.

"I'm not a Premier League manager who can take three months out sitting on a yacht in the Caribbean, I've got to get out on the trail, and I'll go wherever the jobs are."

Although disappointed by his departure from the International Stadium, Bogie is aware of the circumstances behind the decision.

The Tynesiders are currently 14th in the table, having finished eighth last time around, but there are noticeable differences to the set-up at Gateshead from the 2011-12 campaign - including the loss of 35-goal striker Jon Shaw to Luton.

"We had the budget cut during the close season," Bogie said.

"We finished eighth last season, but a budget cut and losing a 35-goal striker was hard enough as it is.

"Over the years we had good strikers, Graeme Armstrong, Lee Novak, who I bought for £3,000 and sold for £150,000, Jon Shaw scored goals, but this season we've struggled.

"I hoped the five strikers we had on the books would contribute 10 goals between them, and it hasn't happened. We haven't scored enough goals this season."

The League Managers' Association website has a list of longest serving managers in the Football League, which had the Football Conference been included, would have placed him seventh on the list before his sacking.

"I've got to look for a new challenge, to be at a club for six years is a long time. I enjoyed every minute, it's memorable but it's maybe time for a change."