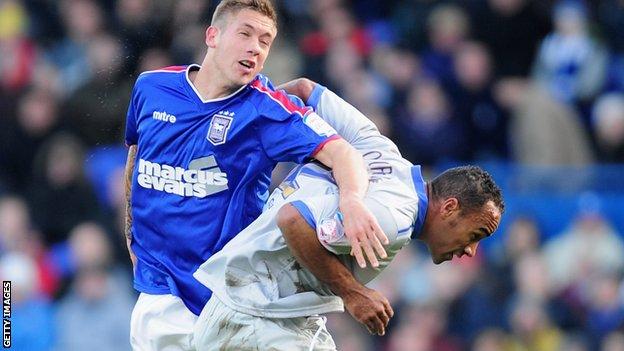 Ipswich Town defender Luke Chambers believes they have overcome the "fear factor" that affected them in the early part of the season.

The change of mindset has been brought about by improved results under Mick McCarthy, who took charge last month.

"In games, you see the boys are not as frightened to play," Chambers told BBC Radio Suffolk.

"I think it's just a different mentality when we're going on the pitch now, and maybe less of a fear factor."

Chambers continued: "We've put in some tremendous performances since the gaffer came in and the boys, individually and collectively, have performed the way we all knew we could."

The 27-year-old joined the Tractor Boys from Nottingham Forest in the summer, but found himself in a dressing room low on confidence as they managed only one win in the Championship in the first three months of the season.

It was not plain sailing at the start for McCarthy after he replaced Paul Jewell, with Ipswich beaten 5-0 and 6-0 by Crystal Palace and Leicester in two of his first four games.

However, they have won their last three games and moved up to 20th in the table, five points clear of the bottom three.

"The gaffer's made no secret that if you're not performing at your best, and you're not buying into what he wants, you're not going to play," Chambers said.

He soon learnt that no-one's place is secure when he was dropped for the home game against Peterborough that followed the thrashing at Leicester.

"I was very disappointed not to play against Peterborough," added Chambers. "But when you lose 6-0, there's always going to be casualties in the team and unfortunately that was me.

"Maybe that may have been a kick up the backside I needed and I feel that since I've been back in the team, I've played particularly well with Tommy (Smith).

"Me and Tommy felt we could flourish (in the) early part of the season, but for one reason or another a lot of mistakes were being made and we were conceding goals.

"The previous manager decided to bring Danny (Higginbotham) in and Danny did really well. Tommy had to sit on the sidelines and that's brought him back a better player."