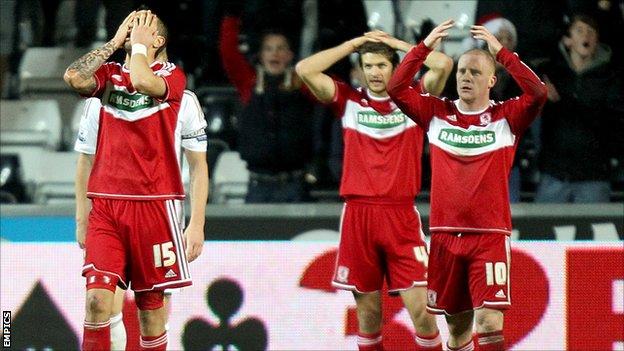 Middlesbrough manager Tony Mowbray has admitted his squad has been stretched by injuries and knocks after the 1-0 Capital One Cup defeat by Swansea City.

Faris Haroun and Andre Bikey were withdrawn with hamstring injuries during the second half to add further disappointment to the Teessiders.

"It's like a hospital ward in the dressing room," Mowbray told BBC Tees.

"We have to wait and see. We'll strap everyone up on Friday and send a team out to try to beat Wolves."

Mowbray added: "Everyone's got an ice pack on. [Grant] Leadbitter came off with a tight hamstring, Andy Halliday has an Achilles problem, and there's a few others."

Boro's exit denied them a place in the last four of the competition, 180 minutes away from a first trip to the new Wembley.

But the level of performance, in addition to the scalp of rivals Sunderland en-route to the quarter-finals, was a positive despite defeat at the Liberty.

"The Sunderland performance was similar to tonight, but it's fine margins, you win a game 1-0 or lose a game 1-0.

"They didn't score a goal that cut us open with clinical Premier League quality, it was an own-goal from a corner that misdirected into the net.

"When it comes to clear-cut opportunities we probably had more than they did, but the result is what we'll see in the history books so we have to move on."