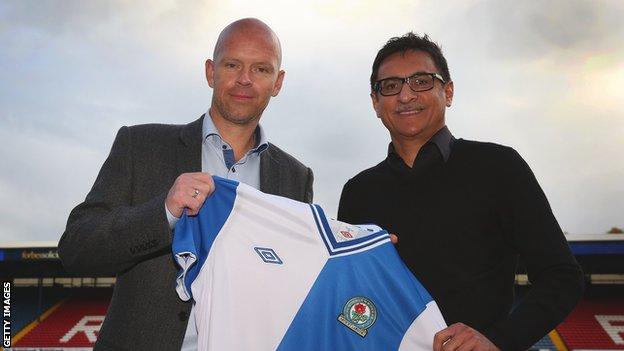 Global advisor Shebby Singh says Blackburn will not be forced to sell their main assets if they fail to win promotion back to the Premier League.

Rovers, who were are 13th in the Championship after 21 matches.

"We are managing our finances really well. If we don't get promoted, we still will be able to sustain the team," Singh told BBC Radio Lancashire.

"Financially, we are way better off than most clubs in the Championship."

But Singh could not guarantee that no first-team regulars would leave at the end of the season if the club fail to win promotion, adding: "Some players have been brought in for specific functions and reasons.

"As is normal in football, there will come a time when certain players are moved on, but we want to hang on to our assets.

"If you don't hang on to a core group of players, around whom you can build the team and the club, there's no point in having long-term plans.

"What I'm trying to do is build a club that can survive and sustain."

Blackburn signed 12 new players in the summer as they prepared for their first season back in the second tier.

Among them were experienced internationals and on free transfers, while Rovers broke their transfer record to sign

But their return to the Championship has not gone exactly as planned - at the end of September, despite the club being firmly in the play-off places, while has won only one of his eight matches in charge.

"Thirteenth is a bit of a false position for us, given the squad that we have," said Singh. "We have done it in bits and pieces in matches and we need to do it over 90 minutes, to be more consistent.

"We are near, but not near enough."

Singh also revealed that he and Berg have yet to discuss any possible transfer targets they may pursue during the January transfer window.

Shebby Singh was the special guest at BBC Radio Lancashire's Blackburn Rovers forum - you can listen to the programme again on the BBC iPlayer until Wednesday, 19 December.