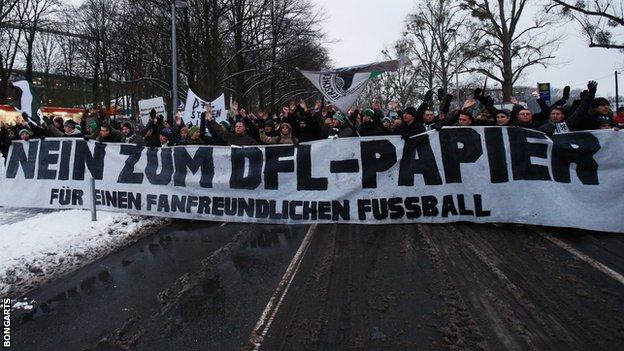 German football has a reputation for being among the most fan-friendly in Europe. But the top two divisions have just agreed tighter security measures after a sharp rise in violence. BBC Sport presenter Andrew Lindsay, in Frankfurt for the decision, explains the background to the move.

It's 1.30pm on a Wednesday. Frankfurt is freezing. Yet football fans are gathered outside one of the German city's business hotels.

They're not waiting for a new signing to emerge in a sports car. The majority do not support a local club. They have travelled miles just to show the people inside that they exist - traditional rivals with different coloured hats and scarves, but the same opinion about the events at the press conference inside. This is the culmination of their 12:12 campaign, on the day after which it is named.

It was an important day for professional football but there's no feeling of triumph or something like that. It was a day when we had to do what is necessary for our security in the stadia

The 12th day of the 12th month was set weeks ago as the day on which German football authorities would announce new security proposals. It would be an understatement to say their plans were not universally popular.

"What we're critical of is that there were no fans involved in the entire process," says Johannes Liebnau.

Unlike some fans, he's not drinking a beer as he waits in the cold. After waking up at 4am in Hamburg, it's practically night-time for him, but he has a five-hour return drive to make - after making his presence felt with fellow fans before the authorities tell the media which new measures will be adopted.

"The German fan culture is very important for the German football culture - unlike in England, for example," continues Liebnau, a spokesman for Hamburger SV's Ultras group. "The Bundesliga is not the best when it comes to success in Europe, but we do have a very unique atmosphere. The German fan culture is very 'involved'. There are organisations that could speak for thousands of fans. None of them was involved and that is a pity."

The Bundesliga and the Ligaverbandes - the body that represents Germany's professional clubs - are responding to political pressure. Football-related criminal proceedings are at their highest in 12 years. And the next German federal election will take place, coincidentally, at the start of next season.

For the 12:12 campaign, supporters chose a rare weapon: silence. At recent games, they didn't sing or chant for the first 12 minutes (and 12 seconds for the more officious terrace watchdog). They wanted to show what it would be like if they were not there. Then some of them turned up in Frankfurt to show they most certainly were.

"For me it's no surprise the supporters joined us today because of the decision," says Dr Reinhard Rauball, the Ligaverbandes president. "We understand the supporters will use their votes - not just in the past or today but in the future. But for me it's important there are no illegal things. The competition is most important and the fans are part of the competition.

Dr Rauball has announced 16 new security rules, but they are not as severe as some fans feared.

They were worried in particular that there was going to be a big reduction in ticket allocations for away fans. They credit the mandatory allowance of 10% of capacity as a crucial factor in the vibrant atmospheres the league enjoys.

The threat was a reduction to 5% - instead, clubs will be given powers to limit allocations for specific opponents, and only "with good reason".

According to international headlines, the biggest threat was to Germany's much-treasured standing areas. In reality, Germany's federal system would make a ban somewhere between impractical and impossible in statute, and there is little-to-no will within the game for any such change.

One advocate of the ban - German Police Union chairman Rainer Wendt - used trouble at a Hertha Berlin game to advocate his cause. Berlin's Olympic stadium has no standing areas.

"One problem is that the clubs and the governing bodies are not ready yet to cope with the demands of the supporters," says Michael Gabriel, a social worker employed by the state as a conduit for the supporters and authorities.

"The supporters are very well organised on local and national levels - clever people who are able to express themselves. And the attentions of the clubs have been headed far too much toward sponsors and TV companies. They forgot a little bit about supporters. Really, they can't value what the supporters give to football.

"They want to get better and integrate the interests of the football fans into the game. But we have a problem with the politicians - mainly those responsible for safety and security in different cities."

Those politicians, however, are not responsible for the stated 20% increase in football-related police work, or for the recent violence between Hannover 96 and Dynamo Dresden, which saw the latter expelled from the domestic cup competition.

Supporters dispute the figures, with evidence from the country's National Football Information Point (NFIP). Stuart Dykes, an English-born Schalke fan, says: "There hasn't really been an increase in violence and the NFIP figures back this up. And the injuries haven't doubled. They have increased - from 846 to around 1,110 out of nearly 18 million fans! But the figures tell you nothing about how these injuries occurred because the police don't know. It is estimated that half are caused by officers wielding pepper spray."

Security at grounds will certainly increase. Proper training and certification for match stewards and security staff will be provided, though anything beyond a "pat down" search must in future be carried out in front of a supporters' representative, if requested.

"What we saw today was not a revolution," says Bundesliga chief executive Christian Seifert. "We decided to make things a little more concrete in future with regard to safety issues. Now the clubs are in a position to discuss - in each city, in each region - what happens and what that means for the future.

"The league and the clubs understand that they made some communication mistakes in the last weeks. But in future - whether they are in the standing area, the family block or the VIP seats - the fans will see that the clubs and the league will do anything to support the fan culture we have in Germany."

That culture provides the continent's highest crowds - a match-day average that is 10,000 above the Premier League's. The cheap standing tickets (it costs less than £15 for adults to watch champions Borussia Dortmund from behind the goal) are subsidised by higher prices for the seats, which have their own charms, including the delivery of beer and sausage in some stadia.

"It was an important day for professional football but there's no feeling of triumph or something like that," says Dr Rauball of the new measures, which take force from next season, with a review to be held after three years.

"It was a day when we had to do what is necessary for our security in the stadia. We have to find a way that the fans and the clubs have the same base. I'm sure the clubs will work on it and we will see the result in some weeks, months or years."