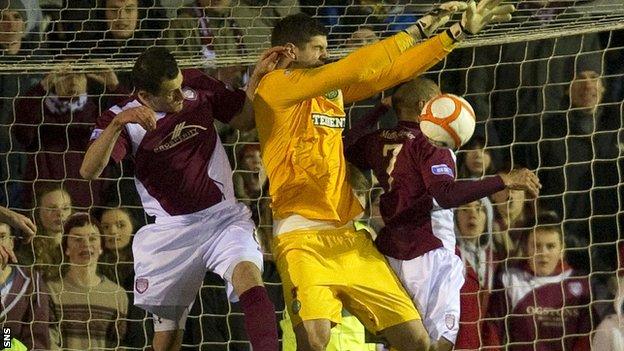 Player-manager Paul Sheerin was full of praise for Arbroath after their 1-0 Scottish Cup replay loss to Celtic.

"Over 180 minutes, to match the champions of Scotland the way we have has been excellent and I'm very proud of the players," he told BBC Scotland.

"There is a slight frustration but when you play teams like that you have to equip yourself well and that's what we did.

"I said I'd be happy if did ourselves justice and I think we did that."

Adam Matthews fired the visitors in front on 18 minutes at Gayfield but the Second Division outfit turned in a strong second-half performance.

"I hope they learn from it and I hope they want more of it," Sheerin said of his part-time players.

"These are the games you want to be involved in

"For the first 20-25 minutes Celtic were very good and caused us a lot of problems.

"But after they scored we settled a bit better. Our shape was good and our discipline was good."

Arbroath did have the ball in the net when Steven Doris forced it home from close-range but the referee's whistle had already sounded for a foul on visiting goalkeeper Fraser Forster from Sheerin's corner.

"My initial reaction was I didn't think it was a foul," explained Sheerin, who had overseen a famous 1-1 draw at Celtic Park on 1 December.

"I would need to see it again but my first thought was there wasn't much wrong with it."

Forster later denied home substitute Connor Birse in a one-on-one situation but the manager had no complaints about his replacement.

"Connor did everything right," he said. "He hit the target and big Fraser spread himself really well to get a foot to it."

"Conditions were not ideal," Sheering agreed. "It was a bit skiddy at times and it was running away from you but it's the same for both teams.

"We've been a bit patchy, so we need to take that mentality into our league form and hopefully get a bit of consistency."