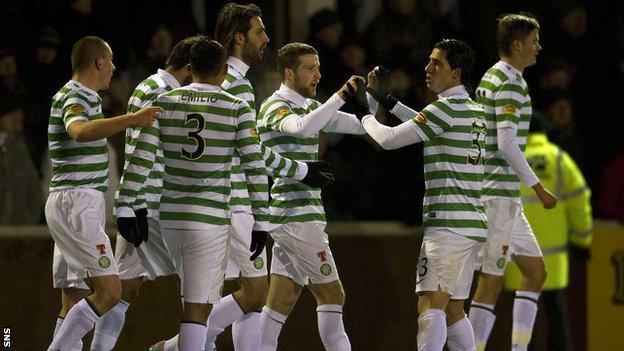 Manager Neil Lennon was relieved to see Celtic get the better of Arbroath in a hard-fought Scottish Cup replay.

"It was a real test of character and I'm delighted with the attitude of the players," he told BBC Radio Scotland after

"It was uncomfortable at times, but that's cup football.

"We're into the next round and it's another competition to look forward to in the New Year. Overall, I'm pleased to get the job done."

The match-winner came on 18 minutes when Adam Matthews galloped up the park to hammer in his first goal for the club from 20 yards.

We weren't at our best but we got the job done, which is the main thing

After the interval, the Second Division side pushed for a way back and caused Celtic problems.

And Forster averted the possibility of extra-time when he saved well from a one-on-one with Red Lichties substitute Connor Birse.

"The pitch became a great leveller," explained Lennon. "It was almost like an ice rink, second half.

"The ball was just running away when the players were trying to pass it because it was skipping up off the frost.

"It almost became dangerous at times."

The home side were aggrieved to be denied an equaliser but Lennon thought it was the correct decision.

"It looked a foul on Fraser and the whistle went long before the ball hit the net," he explained.

"They might make a meal of it because it's against us but I thought it was a foul at the time.

"We had a goal disallowed before we scored [Lassad from an offside position] and I thought we played very well in the first half.

"But as it got colder and as the pitch hardened up more, it became a level playing field.

"I knew it was going to be hard, that's why I went with an experienced team.

"I thought about changing my goalkeeper tonight but I'm glad I didn't.

"Winning games is hard but the players are doing it well at the moment."

Welsh full-back Matthews was delighted to have opened his account in such stunning fashion.

"I had nothing else on, so I just thought why not and had a go - luckily for me it went into the top corner," he said.

"I think overall we deserved the win but they put up a good fight and could have scored.

"We knew it was their cup final really, so you have to go with the right attitude.

"We weren't at our best but we got the job done, which is the main thing."