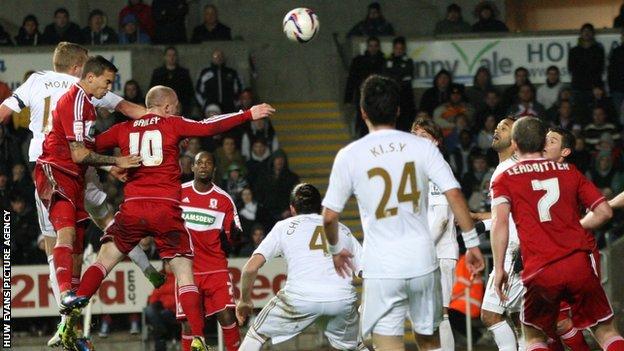 Swansea manager Michael Laudrup said he has "no preference" who his side faces in the semi-final of the Capital One Cup after their 1-0 victory over Middlesbrough at the Liberty Stadium.

The line-up will be completed on 19 December when favourites Chelsea travel to Championship side Leeds United.

"The only thing I would love is to have the second leg at home," said Laudrup.

"I would like a full house here [at the Liberty Stadium] and people knowing that if we had a good result we would go to Wembley."

A Seb Hines own goal sent Swansea into the last four of the League Cup for the first time in their history.

Laudrup admitted his side were not at their best as their opponents from the Championship were denied three times by saves from goalkeeper Gerhard Tremmel.

The home side gradually improved and a flurry of corners finally paid dividends as Hines rose to head into his own net.

"It was a tight cup game, and not the best match to watch as a football fan I imagine," added Laudrup.

"But I don't think the Swansea fans cared too much after the final whistle.

"We are in the semi-finals after a difficult, tight game. We were a little to tense in the first half - everyone wanted to win so badly to get into the semi-final.

"And I have to say that Middlesbrough are a good side and we might play them again next season in the Premier League.

"They created some problems for us but in the second half we came out much more relaxed and moved the ball better around.

"We had a late goal at that was enough. I'm pleased, obviously, with the result because I knew it would be a much more difficult game than some people thought beforehand."

Swansea are second favourites behind Chelsea to win the competition but Laudrup stressed he has seen enough cup games to ignore such predictions.

"I think all the teams in the semi-finals will believe they have the possibility to go to Wembley and to win," said Laudrup, who won the European Cup at Wembley as a player in 1992.

"If Chelsea win their quarter-final against Leeds they will be the favourites to win, but the other three are there too.

"Everyone will say that Bradford are the weakest team because they play in League Two, but look what happened against Arsenal."

Middlesbrough manager Tony Mowbray said his side's performance bodes well for their hopes of gaining promotion from the Championship.

He said: "We gave a decent account of ourselves. It was a game we could have won. I don't think there was any time when they cut us open.

"I think the team can take some heart that if we can get out of this division we are in, we can come into the Premier League and be positive."