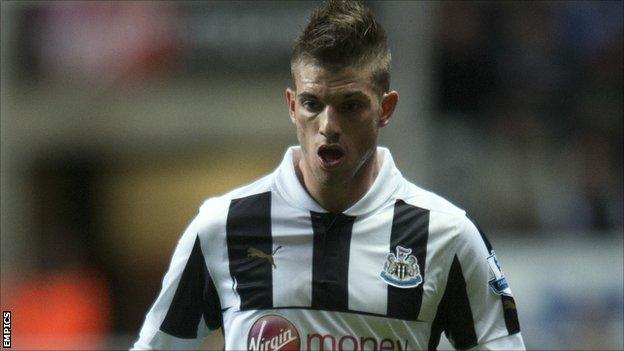 Newcastle United's Davide Santon hopes to come out on top against former team-mates Mario Balotelli and Maicon when Manchester City visit on Saturday.

The 21-year-old is on friendly terms with fellow Italy international Balotelli and Brazil full-back Maicon after his time with Inter Milan.

"I am friends with Mario. I played with him and Maicon at Inter Milan," Santon told BBC Newcastle.

"But I want to win the game, so we'll see on the pitch this Saturday."

Santon joined the Magpies in August 2011 from Inter and, having settled in the United first-team, has flourished at left-back.

Although still waiting for his first goal, the £5m signing has been an ever-present this term.

"I am happy in Newcastle because I think it's a nice city and the people are good, the club is amazing," Santon added.

"I'm happy at training, happy outside with my girlfriend, and being happy helps you play your best."