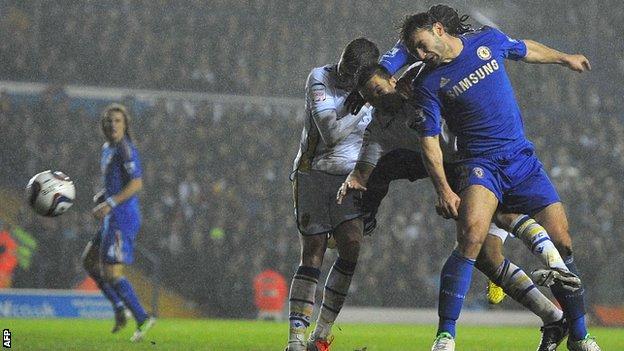 Chelsea came from behind to thrash Leeds at Elland Road and reach the Capital One Cup semi-finals.

Luciano Becchio finished a counter-attack to give the home team a half-time lead and hope of a famous win.

But Juan Mata fired an equaliser just after the break and Branislav Ivanovic headed the Blues into the lead.

It is a result that maintains their unbeaten record against Leeds in cup competition and gets them back to winning ways after defeat by Corinthians in the Club World Cup final.

The European champions looked in big trouble as Championship side Leeds opened the scoring in front of 35,000 passionate supporters.

But they produced a superb response to give Rafael Benitez his most important victory since taking over as interim manager.

The warnings of League Two Bradford's shock win against Arsenal in the same round were heeded, and Chelsea are now two wins from securing the first trophy of the English domestic season.

Much of the build-up focused on the fierce rivalry of these clubs in the 1960s and 70s, but there was little sign of the old animosity. There were even handshakes between Benitez and Leeds boss Neil Warnock, despite Warnock suggesting he might refuse the gesture following a dispute between the pair dating back to 2007.

It was left to the home crowd to stoke the atmosphere and their side responded with a first-half showing that looked every bit the performance of a side with four wins from their previous five matches.

At the other end, Moses felt he was tripped by Brown in the box but got up to draw a fine stop from Ashdown.

But Leeds looked dangerous going forward and Chelsea seemed to be showing the effects of Monday's 6,000-mile flight back from Japan.

The hosts' reward came as Sam Byram intercepted a Luiz pass and released Michael Tonge, who fed Jerome Thomas on the right and his accurate cross was converted first time by Becchio.

The visitors showed signs of coming to life before half-time as Ashdown twice denied Frank Lampard - albeit either side of a Tom Lees header that could have doubled the home side's lead.

That miss proved costly when, a minute into the second period, Moses teed up Mata to beat Ashdown with a low strike that the goalkeeper might have saved.

Chelsea were definitely stirring now and after Torres went close with a header, Ivanovic nodded in at the near post from Lampard's corner.

Moments later, Moses ran at a shaken Leeds defence and made it three with a powerful effort, before Hazard ran on to a perfectly weighted Luiz through-ball to score shortly after coming on.

Torres got in on the act with a late tap-in to boost Chelsea's hopes of a fifth League Cup triumph.