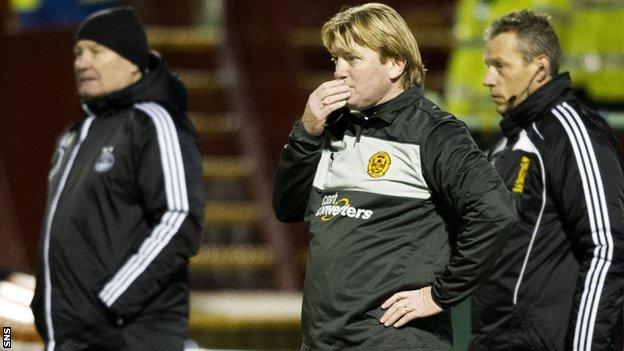 Motherwell manager Stuart McCall is urging his players to renew their efforts to maintain third spot in the Scottish Premier League after losing their Scottish Cup replay to Aberdeen.

The Dons emerged from Fir Park 2-1 victors thanks to goals by Rory Fallon and Joe Shaughnessy, though Michael Higdon scored a late penalty for Well.

"If we finish in the top six it would be good, but why can't we have a go at the top three?" questioned McCall.

"We've got to set ourselves a target."

Motherwell lost 2-0 to Rangers at Ibrox in the Scottish Communities League Cup and now find themselves out of the main cup competition.

McCall added: "If I sense that anyone is feeling sorry for themselves, then they won't be involved.

"We've got too good a group for it just to peter out.

"If we are on top of our game we can be as good as anybody. We've got to be the best we can possibly be."

Motherwell, for all their first-half possession, rarely troubled Aberdeen goalkeeper Jamie Langfield, though Stuart Carswell's drive did just that.

"As much as we dominated in periods we didn't create many chances," McCall told BBC Radio Scotland.

"We were in the ascendancy and we just needed a bit of magic.

Goalless at half-time, Aberdeen stepped up a gear in the second half and strikes by Fallon and Shaughnessy put them in a commanding position before Higdon's injury-time spot kick created some jitters among the 900 or so travelling fans.

"Everyone talks about the first goal being so important and we were caught sloppy," said McCall.

"They were catching us on the break as we were trying to break them down.

"In the second half they defended really strongly and we couldn't find any gaps down the sides or through them and we didn't really create a lot.

"They were certainly the better team in the second half and they deserved to win."