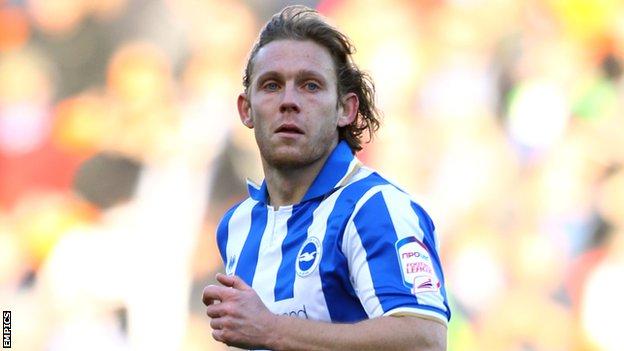 Brighton & Hove Albion striker Craig Mackail-Smith says the side must stop "panicking" in front of goal.

The Seagulls currently lie one point off the Championship play-off places.

The 28-year-old told BBC Sussex: "We need to believe we are going to score. It's a hard league and there is a lot of pressure on it.

"I think we are panicking a bit when we get in front of goal as we are creating so many chances and not sticking them in the back of the net."

I think there is a bit of hesitancy from everyone. They want to score but are worried they are going to miss

Mackail-Smith scored his 10th league goal of the season in the 2-2 draw against Charlton on Saturday after four appearances without finding the net, but believes "a bit of hesitancy from everyone" is holding them back .

"They want to score but are worried they are going to miss. I think it's a case of getting it on target and if it doesn't go in, to keep working hard to make sure it does," he said.

The Scotland international hit the post in last week's 3-0 defeat to Crystal Palace with the score at 1-0.

"I was disappointed to miss a good opportunity," he said.

"As a striker, you have to put yourself in those positions. If you miss then you get a lot of stick.

"If you score, everybody loves you. It's just the way it is."

Meanwhile, Mackail-Smith has given his backing to fellow forward Stephen Dobbie.

Dobbie has only scored twice in 13 appearances for the Seagulls following his transfer deadline day move from Premier League side Swansea.

"I understand what he is going through," Mackail-Smith added.

"He is a completely different player to me who likes to get in the hole and get on the half-turn.

"It's hard when you're a player and it's not going well for you. You get despondent because you know what you can achieve.

"He's a strong character and he'll come through it."