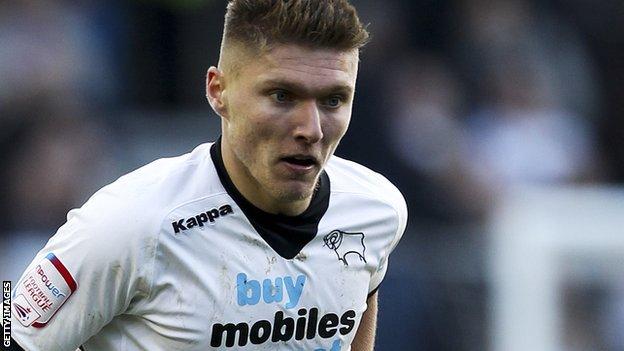 Jeff Hendrick admits he has struggled to recapture the form that saw him win Derby County's young player of the year award last season.

The 20-year-old midfielder impressed in Saturday's 3-1 victory over Leeds United, having just won back his place after two games on the bench.

"It has been hard when things weren't going my way and I was not performing as well as I've wanted.

"I've been beating myself up over it," Hendrick told BBC Radio Derby.

"I've played a few games here and there where I've played well, but I want to get more consistency into my game. I'm hoping to get better and better and string a good run of games together now."

The midfielder was dropped to the bench for Championship matches against Birmingham and Cardiff, before being recalled for the 4-1 loss to Leicester.

He kept his place against Leeds and boss Nigel Clough was afterwards full of praise for Hendrick's display.

"That is a performance most like last season, and that is what we want him to do, and what he has to do to stay in the team," he said.

Hendrick revealed it was the Rams manager's advice to try and get forward more often that helped him regain lost confidence.

"In training I've made more strong runs forward and he told me to take that into the game," the Irishman added.

"Whenever I can, I'm going to run forward more."