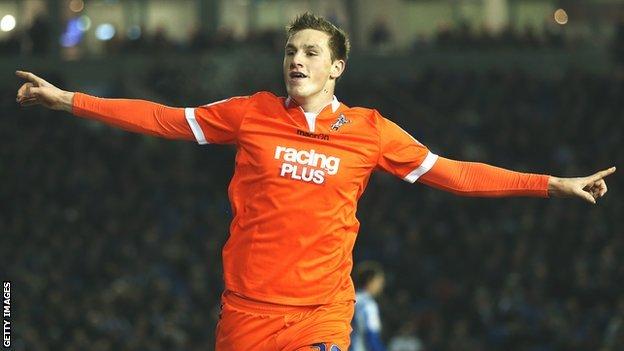 David Lopez's late penalty salvaged a point for Brighton as they came back from 2-0 down to draw with Millwall.

The Spaniard stroked home from the spot in the 88th minute after Craig Mackail-Smith was felled by Mark Beevers.

Two goals from Chris Wood - the first an instinctive close-range finish, the second a superb 30-yard drive - had put the visitors in control.

The point keeps Brighton within three points of sixth-placed Millwall and level with Watford in seventh, but having played a game more.

However, Albion remain winless from four games in December, having now drawn their last three.

They looked to be heading for defeat as on-loan striker Wood demonstrated why both Seagulls boss Gus Poyet and Lions manager Kenny Jackett are keen to sign him permanently from West Brom in January.

The 21-year-old, who was without usual strike-partner Andy Keogh after he broke a toe in the warm-up, put Millwall ahead in the 26th minute with a neat close-range finish from a Shane Lowry cross.

Brighton twice came close to an equaliser either side of half-time, but were denied by the woodwork on both occasions as Gordon Greer's looping header came back off the crossbar and Lopez struck the post with a free-kick.

Wood doubled Millwall's advantage in stunning style just before the hour, cutting across the penalty area and curling a superb shot into the top corner for his 10th goal in 18 appearances this season.

Brighton pulled one back in the 61st minute when first-half substitute LuaLua turned inside and thumped a fierce drive through a crowd of players and past Lions keeper David Forde.

The Seagulls thought they had levelled when Adam El-Abd prodded the ball goalwards from a yard out but Lowry somehow hacked it off the goal-line.

But they were not to be denied and after Mackail-Smith was tripped in the box, Lopez did the rest.

Millwall boss Kenny Jackett on www.millwallfc.co.uk: "I thought it was an excellent performance by ourselves.

"We played very well and gave them problems, particularly early on in the game.

"We surprised Brighton, but the pressure was always going to come and it was a 50-50 penalty decision right at the end."

Brighton manager Gus Poyet: "He [Chris Wood] is the kind of player we would like to bring in,

"He's clinical and brave and we have played a part in helping him on his way."