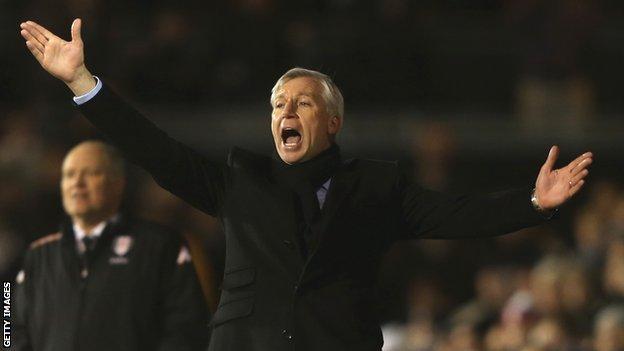 Newcastle boss Alan Pardew admits he is concerned by his side's form after Fulham consigned them to a fifth loss in six games.

The loss means United have yet to win an away game this season and are just four points above the relegation zone.

"I'm worried in so much as we are not picking up enough points, that is pretty evident," said Pardew.

"The performances against Stoke, Wigan and today have improved, but it is a worry we don't have enough points."

Pardew's side have amassed just 17 points from 16 league games this season and sit 14th in the table.

Goals from Steve Sidwell and Hugo Rodallega, either side of Hatem Ben Arfa's equaliser, meant they suffered defeat at Craven Cottage for the sixth time in seven visits and the fourth time on the bounce.

Pardew was particularly unhappy with his side's defending for the winning goal, which saw Rodallega head in unmarked from six yards from a Damien Duff free-kick.

"Second half we had the game by the scruff of the neck really, the goal was a soft goal," added Pardew.

"We gave away a cheap free-kick and then we didn't defend that situation well at all and have come away losing a game we should've got something out of.

"We just didn't defend it well if I'm honest, we are going to have to be better - we can't concede soft goals at this level. To win that game we needed to score three at Fulham and it is really difficult to do that.

"Of course it is very, very disappointing because I believe we have an honest set of players and we work on situations and really for us it is a poor goal [to concede]."

One positive for Newcastle was the return of influential midfielder Ben Arfa, who has missed the last four games through injury, and Pardew will be hoping he can help them reverse their current poor form.

However, they face a difficult run of games during the rest of December, with champions Manchester City and Queens Park Rangers at home before travelling to leaders Manchester United and then Arsenal.