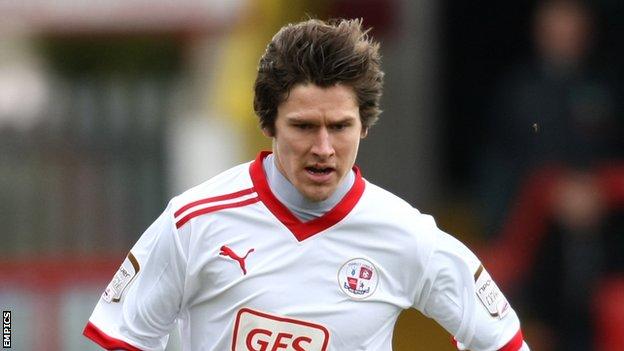 Crawley Town midfielder Josh Simpson has admitted the side were complacent in their 2-2 draw against Shrewsbury.

The Reds needed a late equaliser to salvage a draw despite taking the lead in the first minute.

The promising thing is we are creating chances. We just need to put them in the back of the net

He told BBC Sussex: "After scoring so early we thought it was going to be easy and we got punished for it.

"We knew Shrewsbury hadn't won an away game this season. As soon as we scored we thought we'd score loads more and win comfortably. That wasn't the case."

The 25-year-old continued: "They scored an equaliser, had the momentum and got a second.

"They're an organised team and they sat behind the ball. They were hard to break down but we got there in the end.

"We made it difficult for ourselves. We need to learn from it and cut out the mistakes."

The West Sussex outfit have slipped to 10th in the League One table after a run of seven games without a win.

However, the former Cambridge United and Peterborough man believes the side are close to ending that sequence.

"In the second half, we showed what we are all about," said Simpson.

"We were confident, got on the ball and created chances.

"The promising thing is we are creating chances. We just need to put them in the back of the net."

He added: "We are close to getting our next win. We need to work hard and it will come.

"We're not doom and gloom. Our heads are high and we are confident."