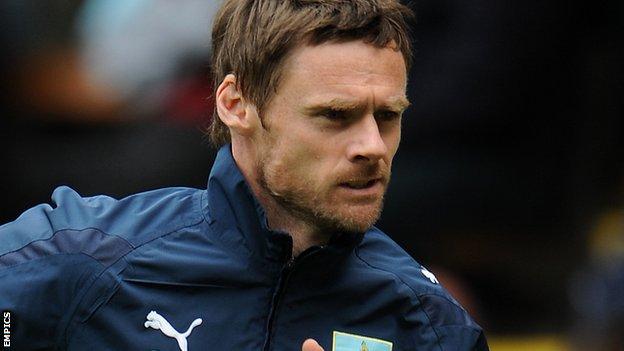 Graham Alexander admitted he struggled to contain his emotions during his first game as Fleetwood boss.

The 41-year-old, who played more than 1,000 professional matches, with the League Two club on Thursday.

He watched the Cod Army at the weekend.

"It was hard trying to keep still on the sidelines. The fourth official kept pulling me back because I was trying to get on the pitch," said Alexander.

The former Scotland international told BBC Radio Lancashire: "I know my time's gone, but I'm just so involved and - I want to be a 12th man for them.

There's plenty of ability in that changing room, which is really pleasing

"The response was great, and the supporters backed the team right until the end, which was great to see."

after three consecutive defeats, came as a surprise to some as the Scot has guided Fleetwood into the play-off places in their first season in the Football League.

Alexander, who had a short spell as caretaker boss of Preston earlier this year, was impressed with his new side's performance against Southend and is confident that he can continue the club's rapid progression.

He added: "I'm a pretty positive guy and, in our first game, I wasn't expecting miracles. There's plenty of ability in that changing room, which is really pleasing. That's the positive for me.

"I could see the lads wanted to play and the commitment they showed on Saturday. That's a great base to build from."