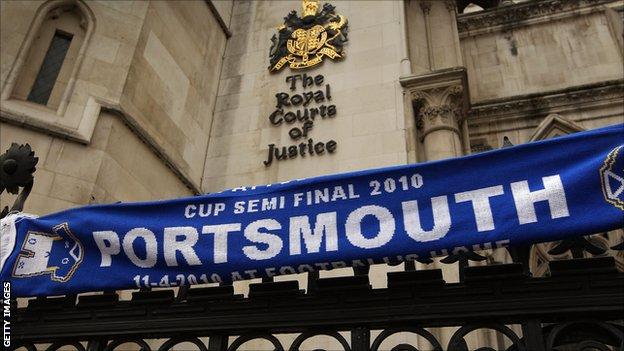 Portsmouth's administrator Trevor Birch heads to the Royal Courts of Justice on Thursday warning that the club could be liquidated if Fratton Park is not sold to Pompey Supporters' Trust.

Administrators PKF are hoping a judge will rule in their favour and force Balram Chainrai to release his charge.

Chainrai is owed £12m by the club and holds Fratton Park as security.

"Liquidation is a real possibility if the PST is unable to complete its bid," Birch told BBC Sport.

Who is who in Pompey saga

Portsmouth have been in administration since February and are said to be £61m in debt.

The case will be heard at the Rolls Buildings of the Royal Courts of Justice on Thursday and Friday, with the verdict expected later that day.

The hearing begins at 10:30 GMT and will be heard by Mr Justice Sales in court 17.

PKF have agreed the conditional sale of the club to the PST - but it is based on the Trust being able to purchase Fratton Park.

Former owner Chainrai controls the stadium - through his company Portpin - and the Hong Kong-based businessman has also tabled a bid to take the club over for a third time.

Chainrai will not attend Thursday's hearing, with Portpin being represented by law firm Walker Morris.

"The purpose of the hearing is to ask the Court to give the administrators permission to sell Fratton Park, which is currently subject to a mortgage in favour of Portpin," added Birch.

"The Court will also, at the same hearing, determine the 'market value' of the property after listening to expert witnesses.

"If the Court agrees with the value that the PST has placed on the property, then a sale of the club to the PST can proceed very quickly.

"It is impossible at this stage to predict what will happen if we lose because there are so many variables."

The PST has had Fratton Park independently valued and offered Chainrai £2.75m for the stadium, but he has refused to sell.

Chainrai has previously described the PST's bid for the club as having "no substance" believing his firm, Portpin, was the only bidder with the "experience and money to return Portsmouth to its glories".

However, Chainrai has since suspended his bid for the club.

On Monday the Football League said they will approve the PST as owners if two areas can be resolved.

Those two areas are "the outcome of the current High Court proceedings relating to the ownership of Fratton Park" and "the PST raising the remaining funding from supporters that is anticipated in its business plan".

Insolvency expert and member of the Portsmouth Creditors' Committee, Carl Faulds, says there are three likely outcomes on Friday when the judge gives his verdict.

"One, he [the Judge] says 'yes, sell the freehold to the Trust', so end of story, deal done," Faulds told BBC Sport.

"Two, he says 'sell the freehold to the Trust but satisfy Portpin of some other points'.

When expensive lawyers go head-to-head they can throw all sorts of things into the argument. I think it will be a bit of a dust-up and do think they will be throwing mud at each other

"Or three, 'no you can't sell the freehold to the Trust', in which case the Trust deal probably collapses."

Faulds has predicted "a bit of a dust-up" over the two days with both parties (PKF/PST and Portpin) "throwing mud at each other" as the nine-month battle for control of the club looks set to finally come to a conclusion.

"We don't know what everyone is going to argue on the day but Portpin, no doubt, will be employing some expensive lawyers, as will the administrators," added Faulds.

"So when expensive lawyers go head-to-head they can throw all sorts of things into the argument. I think it will be a bit of a dust-up and do think they will be throwing mud at each other.

"They will possibly try and tarnish the administrators' conduct and will throw whatever kind of argument they can into the pot to get the judge to effectively not support the Trust's bid.

"It could be a complicated argument on the day but I think the judge will boil it down to a few core points and then make an announcement on Friday when the arguing is finished."