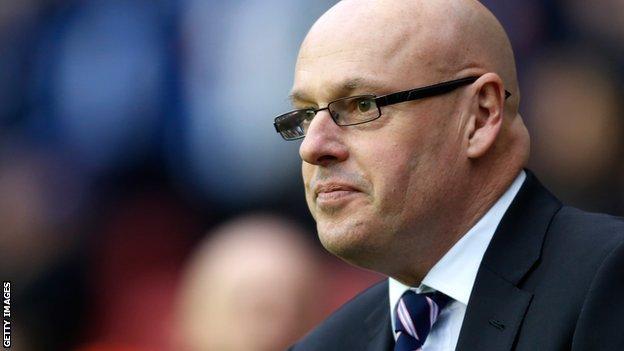 They have won only once in the Premier League this season and are second-bottom with nine points from 15 games.

"It is totally absurd that the manager will not be with us this time next week," Madejski told BBC Berkshire.

"In my humble opinion it's not going to happen. We have to remember the amazing achievement, on a limited budget, to get us into the Premier League."

Reading were beaten 1-0 by Southampton at the weekend and travel to fellow strugglers Sunderland on Tuesday.

McDermott is fully aware of the importance of the fixture and has urged his side to bounce back from the "doom and gloom" of Saturday's result.

He refused to discuss whether his own position was under threat, telling BBC Sport: "I'm irrelevant in all this. The most relevant thing in all of this is the club and the team.

"Nothing has changed as far as my relationship with the owner [is concerned] and it is not something I need to talk about."

Madejski said any decision to dismiss McDermott would solely be down to owner Anton Zingarevich but does not think he is "one for change", given the overall job McDermott has done since being appointed in early 2010.

"It is Anton's decision as he owns the club, but he has a great affection and loyalty to Brian and I don't think anyone could consider Brian's position because he has done an amazing job for Reading."

He added: "I am getting fed up with this carping about the manager and this ghastly sort of merry-go-round of managers leaving. It is just not fair.

"If you notice the results, none have been overwhelming defeats. They have been near misses most of the time.

"We are punching way above our level. You have to remember Southampton spent ÂŁ30m in the summer, so let's get real. I think Brian is doing the most amazing job."