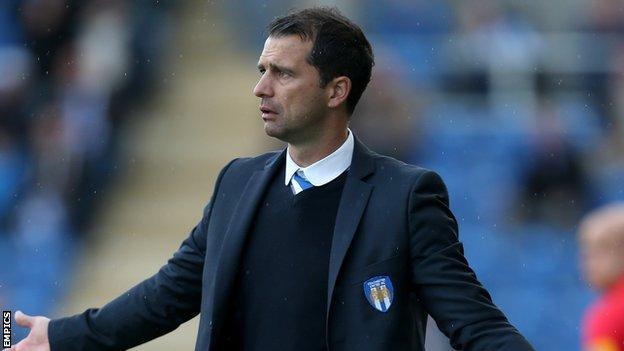 Colchester United boss Joe Dunne has expressed concern about his side's 'lack of bravery' after losing six of their last seven games.

left the U's 17th in League One, just four points above the relegation zone.

"We're in a dog fight. I've asked them if they've been in this situation before," Dunne told BBC Essex.

"It takes a certain mentality and character to get out of this position and we need to find that quickly."

Dunne replaced John Ward as boss in September and made a successful start to his first managerial job, winning five of his first seven games.

But a run of poor results, which included an FA Cup loss to non-league Chelmsford City and a 5-1 thrashing by MK Dons, has seen the U's tumble down the table.

"I've made all my squad who played today available for Tuesday night at Brentwood [in the Essex Senior Cup]," said Dunne.

"They're all coming in. Every single one of them. Three of them will play for the under-21s on Monday too."

He added: "I've asked them to be brave. That means to be brave in possession as well.

"I felt we were even worse against Oldham than against Chelmsford and MK Dons. We were at home and there was no drive."

Craig Eastmond is unlikely to feature for Colchester again before his loan spell ends in January.

The midfielder has returned to parent club Arsenal for treatment on his foot and is expected to be out for six weeks.