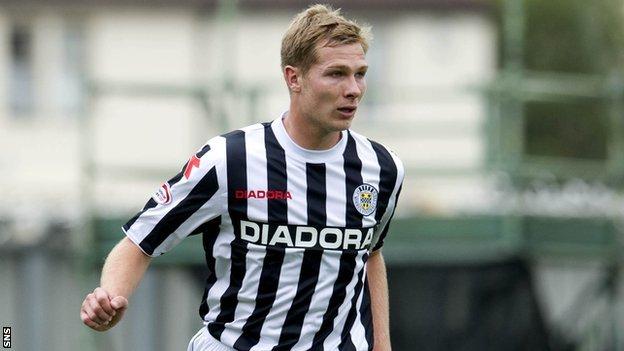 Marc McAusland understands why he had to be the sacrificial lamb as St Mirren went for broke against St Johnstone.

The defender was hauled off at half-time as manager Danny Lennon attempted to capitalise on Steven Anderson's red card with the Buddies 1-0 behind.

"I was on a yellow and he was worried that the referee might look to even it up," said McAusland after the 1-1 draw.

"Lee Mair is suspended for next week and, if we had two centre-halfs banned, it would be difficult for the gaffer."

Even more so considering that next game is against reigning champions and Scottish Premier League leaders Celtic.

"Going to Parkhead at any time of year is difficult," said McAusland.

"But it was 5-0 last season and it is a more difficult place to go just after they have qualified for the last 16 of the Champions League and are full of confidence."

McAusland thought that on-loan Newcastle United full-back Paul Dummett or midfielder Jim Goodwin might be his defensive partner next weekend in Mair's absence.

"The gaffer might bring Paul Dummett in one, but Jim has played there before and did so again against St Johnstone in the second half," he said.

Lennon replaced McAusland with winger Dougie Imrie as the Buddies moved to a more attacking formation after the break.

However, even though the visitors also had Chris Millar sent off, a goal from Dummett - his first for the club - was all they had to show for all their second-half pressure.

"We are disappointed as it was two points lost as we had so much of the ball," said McAusland.

"But it was a good performance and we were unlucky not to get the three points.

"We are heading for our Christmas night out in Belfast and we would have been gutted to go there had we not got something from the game."