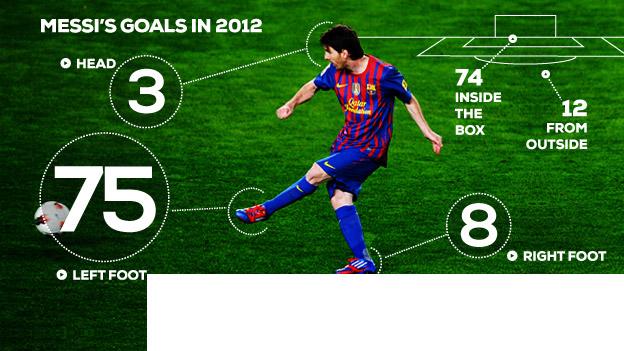 Barcelona's Lionel Messi has set the record for most goals in a calendar year by scoring his 86th goal of 2012.

The 25-year-old Argentine overhauled Gerd Mueller's tally of 85 - set in 1972 - to create a new benchmark which includes goals for club and country.

Messi broke the record with two goals in a 2-1 win over Real Betis on Sunday.

He fired in an angled shot after 16 minutes to equal the record, before adding a second with a low drive in the 25th minute to reach the new mark.

Three-time World Player of the Year Messi's attempt to break German Mueller's record looked set to falter after he was carried off on a stretcher during Barcelona's Champions League group game draw with Benfica on Wednesday.

The forward feared he had seen the "last ball I'd touch for a long time because of the pain" but the injury to his left knee was not as bad as he thought and he started against Betis.

Messi's path to the record has included 74 goals for Barcelona and 12 for Argentina in 66 games.

He still has two league matches and one King's Cup tie to add to his tally before the end of the year.

"I always say the same, it's nice for what it means but the victory is more important as it maintains our lead over the other teams," Messi told Spanish TV station Canal Plus afterwards.

"My goal when the year began was to try to achieve everything again, with the team, in the league, the (King's) Cup, the Champions League."

Mueller scored 72 for Bayern Munich and 13 for West Germany when he set the previous benchmark in 1972 and was 27 at the time.

"Messi will be the player to win the most Ballons d'Or in history," said former Barcelona player and manager Johan Cruyff.

"He will win five, six, seven. He is incomparable. He's in a different league."

"He is still young and gives us so much, even tonight he helped us out defensively when we needed it," said Vilanova.

"His record this year is absolutely brutal. Let's enjoy the moment and not focus on how many goals he might score in the future."

"I think his records will be valued more in the future, it's one more for now but he makes it seem so easy it's hard to measure his talent," said Zubizarreta, who spent eight years as goalkeeper at the Nou Camp.

"It's a team game and he needs his team-mates to help him."

Messi is already Barcelona's all-time record goalscorer but was equal with Cesar Rodriguez on 192 at the top of the club's leading league scoring list before his goals against Betis moved him clear at the top of that as well.