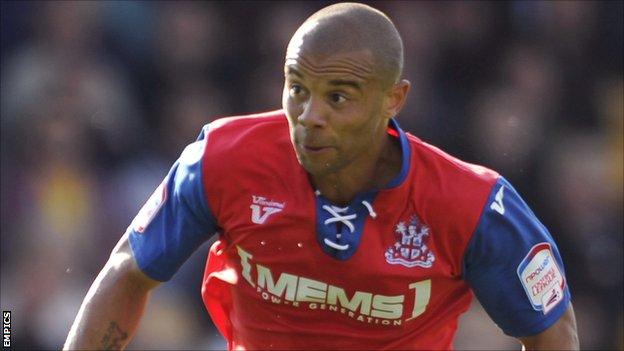 Gillingham manager Martin Allen has said Deon Burton's brace in the was reward for his dedication to training.

The 36-year-old striker took his tally to nine for the season as the league leaders went four points clear.

"It was technical finishing. He practices that and it's not through luck," Allen told BBC Radio Kent.

"When those chances come along and you do practice it comes naturally to put them in the corners."

Burton was coming through into the Portsmouth first-team when Allen, then a senior professional at Fratton Park, first came into contact, and the pair were reunited after

Allen has paired the former Sheffield Wednesday and Derby forward with Danny Kedwell and the duo have contributed 20 goals between them to the Gills cause.

"The Burton and Kedwell partnership proved to be decisive. The pair of them did well but Deon will get the credit," Allen said.

"We took our chances when they came our way, and the whole team contributed. The spine of our team was very strong."

Meanwhile Brighton loanee Romain Vincelot was able to return to Kent with the team after he was assessed in hospital after Saturday's game.

The 27-year-old midfielder had been knocked out in a challenge with Jason Taylor, leading to a 10-minute stoppage.