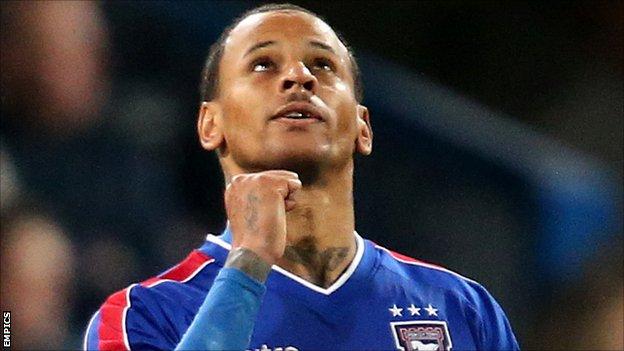 Ipswich Town boss Mick McCarthy has said he is keen to speak with Harry Redknapp regarding the future of Queens Park Rangers striker DJ Campbell.

Campbell, who extended his tally to eight goals in 12 games in had said

McCarthy told BBC Radio Suffolk: "Harry is as good as gold, no doubt he will call me when he gets the opportunity.

"I think DJ is enjoying it and I'm sure he'd like to stay."

He added: "But there are other people watching him. He's scoring goals, the value might go up, and those things are mitigating circumstances as to whether he comes or he doesn't."

The 31-year-old, who cost Rangers £1.2m when they signed him from Blackpool in July 2011, has been limited to only three starts for the Premier League strugglers.

Meanwhile former Republic of Ireland manager McCarthy handed a debut to former Macclesfield defender Elliott Hewitt as a late substitute - the 18-year-old full-back's first appearance for the Blues after his recovery from a hip operation.

"He looks like he's got something. Everyone was looking at him at Macclesfield, but we've got him," McCarthy added.

"He had a double hip operation and he's looking like he's back and fit so it was nice to bring him on."