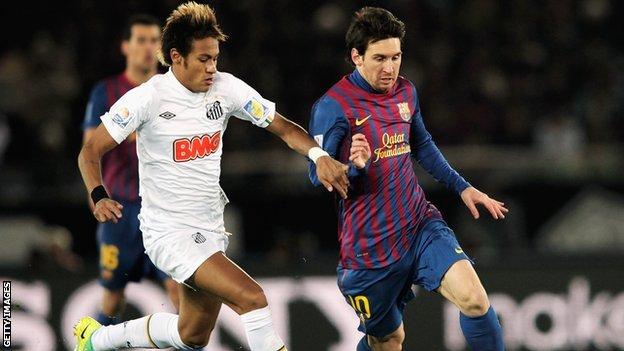 It is one of football's huge 'if onlys'. Had Santos of Brazil not turned their back on the Copa Libertadores, South America's Champions League, in 1965 then the Club World Cup might be very different today.

It could even have become the most eagerly awaited event of the global club calendar, instead of the sideshow it so often seems to be.

The Libertadores was started in 1960 with the explicit aim of crowning the world's best club. Since 1956 Europe had its own annual champion, so South America devised a competition to come up with its own challenger, and the representatives of the game's two traditional continents did battle home and away.

The early years of the Inter-Continental Cup were sensational. In the first version, Real Madrid eased past Penarol of Uruguay - Ferenc Puskas and Alfredo Di Stefano putting Real three goals up in the first 10 minutes in the Madrid leg. Six years later the two sides met again and an era came to a close. Penarol won home and away - it was to be almost 20 years before the Spanish giants claimed another international trophy.

There was also Pele and his magnificent supporting cast at Santos. In 1963 the great man was only fit for the first leg - even so his team-mates came out on top after three thrilling games against Milan. And a year earlier the tournament played host to what Pele describes as the best performance of his career, when he tore Benfica to shreds in Lisbon.

Imagine Pele and company testing themselves against the Manchester United side of George Best, Bobby Charlton and Denis Law. Or, just a few years later, against the rising new force from the Netherlands, Johann Cruyff's Ajax - clashes every fan in the world would have been desperate to see.

But they never happened. After 1965 Santos declined to participate in the Libertadores. In the days before television money, the tournament was a financial liability - especially for a club such as Santos, with a small stadium and a huge payroll.

It made better financial sense to tour the world playing friendlies. So Brazil's best side pulled out - indeed, in 1966, and again in 1969 and 70, there was no Brazilian participation in the Libertadores.

This opened the way for the competition to be dominated by clubs from Argentina - at a most unfortunate moment for the development of the game.

The response was a new brutalism, exemplified by Estudiantes, a relatively modest club who took a stranglehold on the Libertadores in the late 60s. Solid defence and counter-attack, a commitment to detail and to the use of set-pieces was combined with a win at all costs mentality which had little regard for the quality of the spectacle.

And at the same time as the new Argentine school took possession of the Libertadores, domination of the European Cup moved from the south to the north of the continent. Sparks were guaranteed when the two came together to contest the Inter-Continental Cup.

Both had different interpretations of what was acceptable - and especially, of what was unacceptable. What to one side of the Atlantic was solid tackling was seen on the other as gruesome violence. Likewise with shirt-pulling and spitting.

There seemed to be no consensus on basic rules - a state of affairs Fifa did little to improve. The Inter-Continental Cup, of such promising beginnings, turned into a succession of pitched battles. Before long, the Europeans had had enough. More often than not in the 1970s, the winners of the European Cup declined to participate. Either the runners-up stepped in or, as in 1978, no game took place.

Then, in 1980, the contest was resurrected as a one-off match in Japan. The European champions always took part, but, especially if they were from the north, tended to treat the thing as more of a jolly jaunt than a serious challenge.

Now, of course, all the continents are represented, which can only be a healthy thing. Clubs from less traditionally strong continents can only improve by testing themselves against the best.

The problem of the current format is that the opportunity to pick up experience is so limited. In a concession to the cluttered calendar, the schedule is devised so that the Europeans only need to play two matches. The idea is to involve everyone but ensure the Champions League winners can be in and out as quickly as possible - a compromise that ends up leaving most people unsatisfied.

Corinthians, though, will be ecstatic if they can take the title back to Brazil. It almost seems that the more the title is ignored in Europe, the more it is prized in South America - where the chance of having a go at the Champions League winners is the highlight of the year.

They certainly have a chance, not least because the current Chelsea side are not the most daunting challengers Europe has ever mustered. Corinthians won this year's Libertadores with the finest defensive record in the history of the competition - just four goals conceded in 14 games. They are not an overly cautious side, but the intelligent coach Tite has built a team who keep so compact that they could be mistaken for a European outfit.

It will be fascinating to follow their progress - and even more interesting to enjoy the atmosphere created by their huge army of travelling fans. Indeed, the presence in Japan of so many Corinthians supporters should give food for thought. That so many can afford to make the trip from Brazil is indicative of the new global economic architecture. Corinthians, soon to move in to a brand new stadium built for the 2014 World Cup, are well placed to take advantage of their country's boom.

Before long, perhaps the Brazilian clubs will be able to meet the Europeans on a more equal basis. Then we might find the quality of spectacle which, some five decades after Santos gave up the quest, will finally consolidate the Club World Cup as one of the game's major events.

Any questions on South American football? Send to vickerycolumn@hotmail.com and I'll pick out a couple for next week.

I'm living in Peru and I was watching the first leg of the final of the Copa Sudamericana last Wednesday, Tigre of Argentina against Sao Paulo of Brazil. My question is this - what's the significance of the 1992 emblem on Sao Paulo's shirts?

It's a commemoration of 20 years since the club enjoyed a wonderful year, winning both the Libertadores and the Inter-Continental trophy, a feat they were to repeat the following year.

I feel a bit sorry for you and anyone else who sat through the 0-0 between Tigre and Sao Paulo. It was dreadful. Sao Paulo will be ruing yet another idiotic sending-off for their star striker Luis Fabiano. He's suspended from Wednesday's return match. Even so, on such a big pitch as Morumbi I'll be surprised if Tigre can hold them - and whatever happens it surely can't be as bad as the first leg.