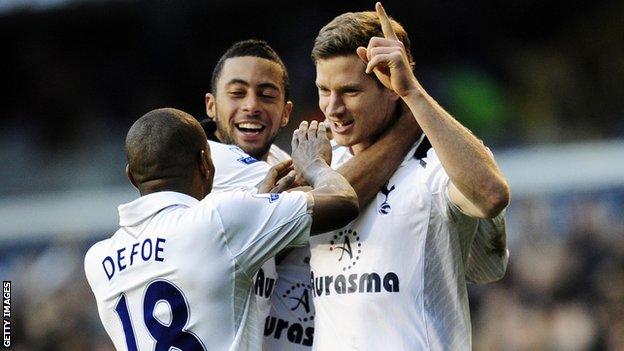 Spurs had to work hard before breaching the visitors' well-organised defence with 15 minutes remaining.

Swansea had few chances and remain 10th despite a second successive defeat.

The visitors arrived in north London with a reputation for making the most of their attacking opportunities, and they had a good early chance when Jonathan de Guzman's corner found Chico Flores unmarked, only for the big Spaniard to shoot over the bar.

Along with defensive partner Ashley Williams, Chico was far more impressive at the other end of the pitch as Michael Laudrup's men dug in well.

The England striker was then gifted possession by Michu, who somehow recovered to block his Spurs opposite number's shot.

Spurs continued to dominate, with Defoe again, Adebayor and Aaron Lennon all failing to find the net.

Chances at the other end were rare, but Swansea demonstrated their attacking potential when Dwight Tiendalli whipped in a cross that almost found Wayne Routledge's head.

And while Kyle Walker's powerful 35-yard shot perhaps deserved more than to be parried away by Tremmel, Michu may have felt similarly disappointed when his instinctive long-range effort cleared the Tottenham crossbar.

The game continued in similar fashion after the break, Defoe setting Walker free on the right only for the Spurs defender to shoot wide.

Just when it seemed the breakthrough would never come, the home side's perseverance finally paid off when Walker, via Swans defender Davies, found Vertonghen, who spun on his heels before guiding the ball into the bottom corner.

As he lay in the Spurs penalty area, the home side pressed forward, much to the fury of Laudrup's men and the visiting supporters.

But while Michu recovered, Swansea could not and Tottenham took all three points.

Tottenham manager Andre Villas-Boas: "It was hard work but the one team who were going to win was us with 23 shots and so much possession. Swansea came out on the counter well and the result was uncertain at 0-0 but we deserved to get the result.

"It was difficult. Michu was defending in his half and it was difficult to break them down. We kept focus and were patient. I'm very happy with the speed we played.

"It was very important. It gets us back to fourth place. The table is tight but it was good to give something back to the fans at White Hart Lane."

Swansea City manager Michael Laudrup: "We knew that we were up against a very good side, one of the best in the league.

"We knew if we came to half-time still 0-0 or not conceding we would have a big possibility of taking something away from here.

"In the second half they weren't that dangerous so the goal was disappointing. It's not a game where I can say I'm disappointed because we did not play well. We did what we had to do."