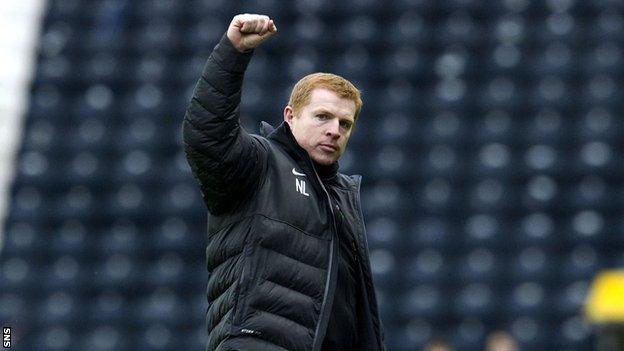 Neil Lennon thinks all of his Celtic stars will want to stay at the club beyond the January transfer window.

"I wouldn't imagine anyone wants to leave at the moment," said Lennon.

"They've achieved great things already this season and hopefully there's more to come and I don't think any of them will be in a hurry to go."

Scott Brown, Victor Wanyama and Adam Matthews all had key contributions to the three goals Celtic put past Kilmarnock in the 3-1 triumph at Rugby Park.

"I thought we were brilliant today from start to finish," Lennon told BBC Scotland.

"The third goal epitomised the way we played. I think everyone touched the ball in the outfield and Adam Matthews, who I thought was wonderful today, delivered a great ball and Sammy [Georgios Samaras] buried it."

Captain Brown gave the Hoops a first-half lead, side-footing into the net after good work down the right by Matthews.

Brown turned creator just after the hour mark when he crossed to give Joe Ledley a straightforward finish.

"We were fantastic in terms of our application and concentration," said Lennon.

"They're full of confidence after what they've achieved in the week [against Spartak Moscow].

"Sometimes you can be flat after that but we weren't today. We're looking for a consistency of wins now."

Hoops fans will have been encouraged by the swashbuckling performance put in by Brown.

"[After the Benfica game] He had an injection and it kicked in maybe 10 days later and since then we've started to see him come back to his very best," said Lennon.

"When he plays like that there's not many better midfielders around.