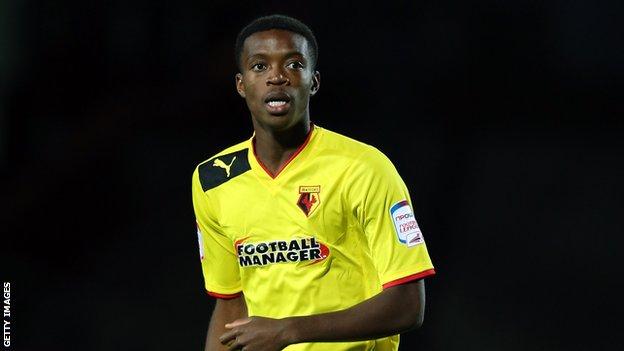 Nathaniel Chalobah opened the scoring for Watford with a 20-yard strike and Austin replied from the spot after Almen Abdi clumsily pushed Dean Marney.

Sam Vokes had a chance to win it for Burnley late on with a header, but Manuel Almunia made a fine save.

Defender Chalobah, on loan from Chelsea, celebrated his 18th birthday earlier in the week by scoring his first Watford goal with a fine strike from the edge of the area.

That prompted the home side into action and in the 28th minute, Austin restored parity with his 17th league goal of the season from the spot after Abdi's push on Marney.

Austin stepped up and sent Almunia the wrong way to score the second goal in his past seven appearances.

Burnley could not find the winning goal however and have now gone five games without a win.

Watford, who could have taken all three points when Joel Ekstrand struck the crossbar with 10 minutes left, find themselves replaced in the play-off positions by Millwall.

"We're not hard done by because that is the reality of football.

"You can dominate games and create as many chances as we did and still not win and that was the obvious view of the game.

"I was pleased with the reaction because I thought it was terrific. From that moment onwards I felt we dominated and the chances we created, I've lost count.

"The reality is though that we have to turn those performances and chances into clinical moments which change games. We so nearly did but we found a keeper on top form."

"It is not going to be easy for anyone to get points here because Burnley are a tough side to play against.

"I would like to be in the play-off zone at the end of season. The table is short and we need to keep working and improving so I am not too concerned.

"We didn't create as many chances as we usually do and the passing wasn't fluid but that is to be addressed during the week.

"I wasn't very pleased with the penalty, it was unclear and I'll have to see it again."