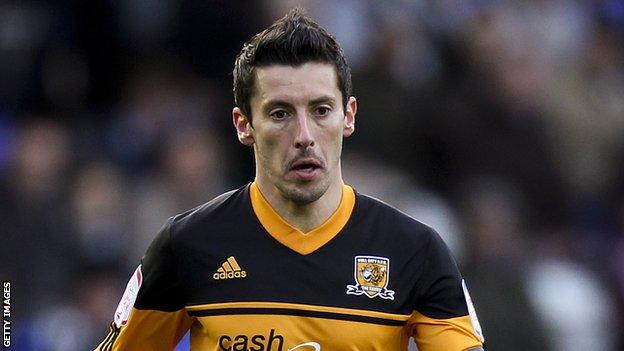 Manager Steve Bruce's players impressed against his former club, and midfielder Meyler shot into an open goal in injury time to secure the points.

Hull's Alex Bruce was sent off after the final whistle for violent conduct.

The Tigers are now level on points with Middlesbrough, with the pair sitting narrowly behind second-placed Crystal Palace who occupy the final automatic promotion spot.

Hull dominated the game from the off and deservedly went in front courtesy of midfielder Koren's fifth goal of the season as he finished from six yards out following an impressive move.

Their lead should have been doubled just before the half-time whistle but centre-back Jack Hobbs, who started in place of the injured Paul McShane, headed Robbie Brady's glorious cross wide when it looked easier to score.

Huddersfield improved after the break, but were unable to turn their possession into chances, and on current form look like they could be drawn into a relegation battle as their winless run stretches to six games.

While Meyler's second goal in consecutive games settled any Hull nerves, they now look set to be without Bruce after Huddersfield striker Alan Lee went down from a push to the chest despite him appearing to strike the centre-back in the face with a forearm.

Hull manager Steve Bruce: "It was an excellent performance and we were the better team by a million miles. Our only Achilles heel is our conversion of chances that we create.

"We are appealing his red, you can understand why. I knew there must have been something in it for him to react like that.

Huddersfield manager Simon Grayson: "It is disappointing because we did a lot of work on trying to match Hull and the way they played and inside eight minutes we were a goal down to something that we had worked to prevent.

"We tried to change formation and get something out of the game, but it was disappointing that we didn't create too many opportunities and when you look back [Hull goalkeeper] David Stockdale has not had too much to do.

"We will just have to work hard on the training pitch. We have got a lot of belief and confidence the players have got what it takes to go on a run at the other end of the table and that we can compete in those reaches again.

"I didn't see what Alan [Lee] has done, but if he has done something he will probably get punished. I don't know what will happen, but he deserves punishing if he's shown to have done something."