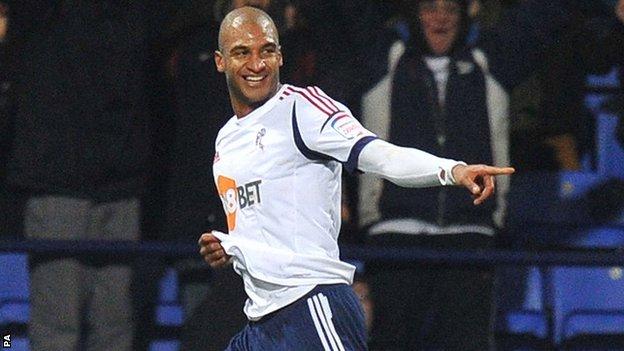 Addicks striker Danny Haynes had missed two promising chances before his side fell behind after 74 minutes.

The forward then exchanged passes with Kevin Davies before drilling in a shot to secure a victory for the Trotters.

The win was only Bolton's second in eight games, while Charlton suffered a first away defeat since 18 September.

The home side almost took an early lead when Chung-Yong Lee played a neat one-two with Chris Eagles before sending a side-footed shot wide.

At the other end, a Tyrone Mears tackle foiled Haynes just as the Charlton striker was set to shoot when clear through on goal.

The two teams again traded chances when Eagles had an effort saved by keeper Ben Hamer, while Haynes headed wide.

Bolton boss Dougie Freedman brought on Martin Petrov and Ngog, with the two combining before the latter gave the Trotters the lead.

Davies helped set up Ngog for his second and Charlton failed to recover as their seven-match unbeaten run was ended.

"I felt that the key today was that we had the opportunity to bring the subs on at 0-0.

"David Ngog turns up every day and works very hard on the training ground and that should be the headline, not his goals.

"He's got a great leader to learn off in Kevin Davies and I myself like to think that I can help him make the most of his career."

"We were disappointed because we grew into the game and created the better chances.

"In the end, though, we were beaten by a substitute who has a huge pedigree in the game and he has made a huge difference.

"I'm sitting here thinking that we should have won but we'll be looking to go into the Christmas period trying to bounce back from a defeat which shouldn't have happened."