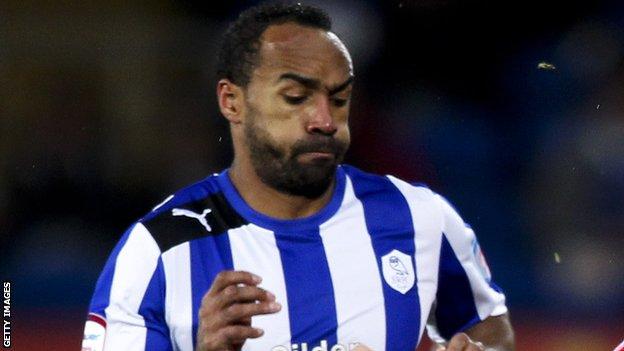 Sheffield Wednesday edged closer to moving out of the Championship relegation zone as they ended a run of seven successive defeats by beating fellow strugglers Barnsley.

Chris O'Grady smashed the ball into the net from close range 10 minutes before the break after the hosts failed to deal with a high ball into the box.

Barnsley dominated after the break, but could not find an equaliser.

Wednesday are 23rd in the table, level on 18 points with Barnsley.

Both sides went into the game looking to arrest an alarming run of form of one win between them in their previous seven matches.

The home side settled into the Yorkshire derby quickest and were first to threaten in the 10th minute when Stephen Dawson's long-range effort was saved smartly by Wednesday keeper Chris Kirkland.

Gary Madine headed wide for the visitors soon after, before Miguel Llera stuck a leg out to deflect a Craig Davies shot wide at the other end.

The deadlock was broken when Lewis Buxton floated the ball into the box and, as Barnsley keeper Luke Steele got caught between two Wednesday players, O'Grady swept into the empty net.

Llera cleared a free-kick off the line soon after the break as Barnsley looked to respond, and the home side dominated the remainder of the second half.

Marlon Harewood's powerful close-range shot was superbly cleared before David Prutton headed an effort off the line as Wednesday survived to take the three points.

"The referee gets it wrong and the ramifications of him getting that decision wrong could be catastrophic, the result has been decided by that decision.

"In the second half, we had more than enough opportunities to get something out of the game.

"I just thought it was a difficult match for the referee. He will be disappointed with his performance when he comes to digest it.

"Unfortunately I don't have a second job to go to on Monday and I have to deal with it."

"It was ugly but well earned. We had Lady Luck on our side for a change, but we deserved it because we battled hard.

"Gary [Madine] has admitted he has barged the goalkeeper, we have not had that luck but today it was our time.

"We got the break today, last week we battered Bristol City and didn't get the break.

"But I thought the referee had an absolute shocker to be fair. Everything after that went against us and he struggled to keep control."