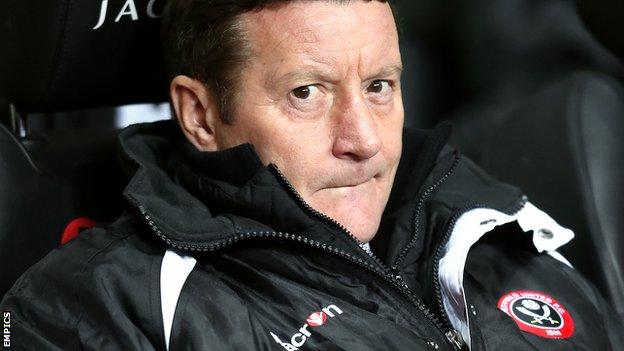 Sheffield United and Tranmere, two of the top three sides in League One before kick-off, played out a forgettable goalless draw.

The Blades dominated possession in the first half but Tony McMahon's effort, which was palmed away by Owain Fon Williams, was their only shot of note.

Danny Wilson's side remain unbeaten at home this season, while Tranmere are without a win in five league games.

The home side also felt they should have had a penalty for handball against veteran Tranmere defender Ian Goodison just before half-time, but their protests were waved away by referee Eddie Ilderton.

Tranmere started the day as league leaders and are a point clear of United, who stay third.

"A point is a point at this stage of the season and you've got one more then you had when you started.

"We had some good opportunities, although they were half-chances, because I thought both defences played well.

"If we had been a bit more composed, we possibly could have been rewarded with a goal.

"We've got to keep battling on and keep picking up points, but it's obviously disappointing it wasn't three points today."

"I don't think either keeper has had a save to make. We haven't created that much and neither have they.

"We're playing Sheffield United. They're capable of playing at the next level up, so I've got nothing but praise for my lads.

"They've done fantastic to come here and get a point."