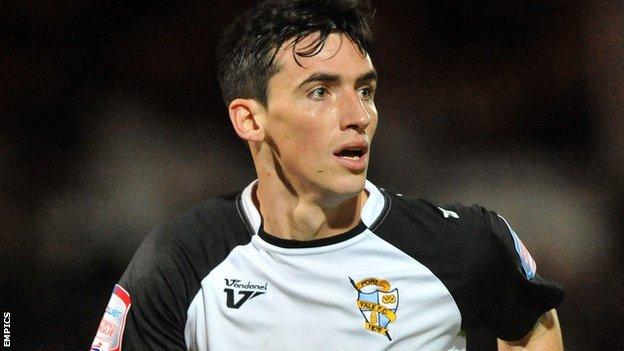 Promotion challengers Cheltenham and Port Vale had to settle for a point as well as both retaining their top-three places in League Two.

Cheltenham midfielder Darren Carter gave the Robins the lead after the break when he struck the ball past Vale keeper Chris Neal from 12 yards.

Vale levelled soon after when Louis Dodds fired in from inside the area.

Cheltenham went close to scoring a late winner when Darryl Duffy had a shot cleared off the line.

The draw leaves Vale in second place and Cheltenham third.

"I thought we were excellent. I'm delighted with the performance and the number of chances we created. We're all a bit shell-shocked we didn't win.

"We're disappointed with the goal. The ball should never go from their corner flag to the back of our net, but they're a good team and their keeper made a couple of great saves.

"Everyone had a really good game and we will focus now on going to Rochdale and getting three points."