Eoin Doyle headed in David Wotherspoon's cross in the first half and rifled another in the second.

But Jamie Murphy then got his brace, first from Chris Humphrey's cross before heading an eighth of the season from close range.

The hosts were by far the more sprightly of the two sides right from kick off, and Doyle had the first opportunity of the game.

He spun his defender on the edge of the box, but, with time and space in abundance, he was too hasty to release his shot and the ball trickled wide.

Leigh Griffiths, a handful throughout with his drifting runs across the Motherwell backline, tried his luck from 25 yards, but Darren Randolph smothered comfortably.

Chances for Stuart McCall's side were few and far between in the opening period, with their best chance coming from a Hibs player.

From a Motherwell corner, Doyle inadvertently headed towards his own goal, but Ben Williams was alert to save the Irishman's blushes.

As Motherwell tried to push further up the field, gaps began to emerge in their defence and they looked susceptible to the dangers of Doyle and Griffiths's pace.

It was little surprise, then, when Hibs opened the scoring four minutes before the break.

Wotherspoon skipped his way down the right hand side and into the visitors' box. On reaching the byline, he picked out Doyle, unmarked eight yards out, who nodded past Randolph. 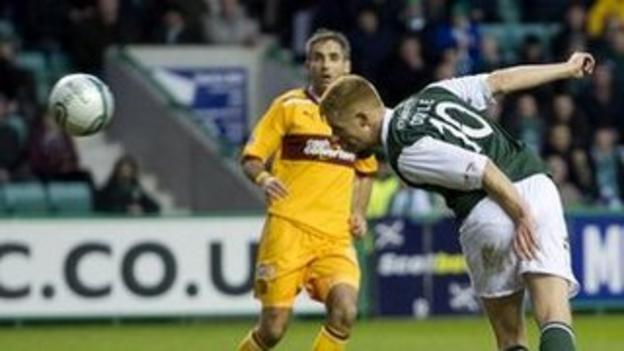 It was little more than Pat Fenlon's side deserved.

Hibs began the second half on the front foot, and Doyle's second doubled his side's advantage on 54 minutes.

He chased down a long ball through the middle, and, beating the offside trap, hammered low and hard past Randolph from 18 yards.

At this stage it seemed like the points were in the bag for Hibs, but Murphy's strike gave the vocal away following some hope.

Humphrey wriggled to the byline before cutting back for Murphy to tap in from close range.

Revitalised by that goal, Motherwell chased hard to leave Edinburgh with something from the game, and were rewarded for their efforts 10 minutes from time.

Michael Higdon rose above the home defence to meet a corner, but, instead of aiming for goal, he nodded the ball across the box for Murphy to head beyond a stranded Williams.

With the three points now up for grabs, it was the visitors, buoyed by their stirring comeback, who grasped the initiative.

Ojamaa, whose pace caused concern for the Hibs rearguard throughout the second period, darted in from the touchline, and his centre was met by substitute McHugh.

The travelling supporters were sent into a frenzy of joy, as the home fans trudged solemnly for the exit.

To compound the woe for Fenlon's team, McPake was sent off for a second bookable offence in the last throes of the game.