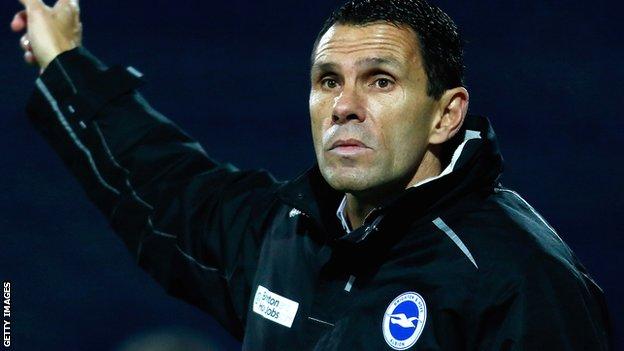 Brighton and Nottingham Forest remain outside the play-off places after a stalemate at the Amex Stadium.

Inigo Calderon saw an early shot come back off a post for the home side and Will Hoskins spurned several chances.

For Forest, Billy Sharp brushed the crossbar and Dexter Blackstock went close either side of half-time.

Both teams have now recorded three goalless draws in the Championship this term.

Brighton, who have now gone three matches without a victory, made three changes and started well as Craig Mackail-Smith cut the ball back for Calderon, only for his left-footed shot to strike the woodwork.

As the Seagulls continued to have the better of proceedings, Hoskins shot wide from six yards and former England full-back Wayne Bridge fired into the side netting having been given space down the left.

Hoskins was off target again with a volley and a header from crosses going over.

Nine minutes from time LuaLua looked likely to make the breakthrough when he collected the ball on the left and cut inside before unleashing a powerful shot, but a diving Camp pushed the ball to safety.

Camp then kept out Buckley after he had burst through following a mistake by Halford.

"The disappointment was there. I am getting bored at listening to myself.

"The first half was nearly perfect apart from scoring. It's up to us. If we do what we have to, we'll win games.

"Imagine if football was fair. But it's about how many goals you score. We've got a magnificent chance to be in the top six if we win.

"We don't want there to be any excuses or dramas - we just need to score and finish games. We need to stop making excuses and win games."

"We'll take our point and move on. We didn't get a foothold in the first half and when the break came the message was to get higher up the pitch and closer to them.

"We had chances either side of half-time and in the second half we got on the front foot and did a lot better.

"Brighton had opportunities in the first half but we nearly scored ourselves and the second half was much more even.

"This is a tough league but we are building ourselves up to go anywhere and compete."