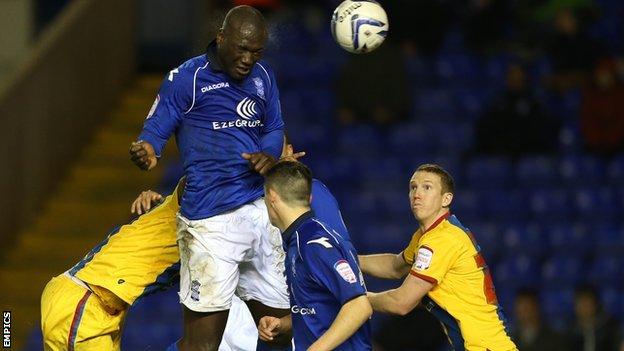 Birmingham came back from two goals down to earn a draw against promotion-chasing Crystal Palace at St Andrew's.

Palace had to withstand some concerted pressure before striker Glenn Murray put them ahead with a simple tap-in.

Some good work from Jonathan Parr allowed Murray to stab in another for the Eagles, who remain in second place.

But substitute Nikola Zigic's headed effort pulled one back for Blues and Papa Bouba Diop also nodded home to rescue a point.

Palace's disappointment at failing to hold onto their lead will be tempered with the news that Championship leaders Cardiff were beaten at home by bottom side Peterborough.

Birmingham are struggling at the wrong end of the table but can take heart from their performance against Palace, along with the character they showed.

The home side actually made the brighter start and Chris Burke's 18-yard effort was saved by Palace keeper Julian Speroni.

Peter Lovenkrands also had an effort saved for Blues before Palace took the lead when Yannick Bolasie's break from the right gave Murray an easy finish.

Birmingham continued to put pressure on Palace but did not get any reward for their play and found themselves 2-0 down when Murray added his second with another close-range effort.

Zigic scored a minute after coming on to give the home side hope and Diop headed in Robert Hall's corner with eight minutes left to earn his side a share of the points.

"I didn't think there was much in the first half. We gave away an awful goal when we didn't compete on the edge of their box. The second goal was something we had discussed all week. We didn't track the run and this was down to simple basics.

"When we were looking down the barrel we have once again produced the half an hour performance that enabled us to get back into the game and potentially win it.

"We were in the ascendancy at the final whistle and I've said to the players 'Why can't we play like that from the first whistle?'

"Why can't we play with that drive, determination, desire and aggressive running without the ball? We appear to have the shackles on when it's 0-0. We do not play with the freedom we show when we have to come from behind."

"The last time I was here we were 2-0 up and looked as if we were cruising and ended 2-2. It felt strangely strange. You have to give Birmingham credit but we made one or two mistakes after they sent on Zigic and we looked a little vulnerable.

"All in all I still thought it was a very good performance. I am probably disappointed with Birmingham's second goal as it was a free header from a corner.

"But the defining moment for me occurred when we had a breakaway before scoring the second goal. (Andre) Moritz hardly ever misses in situations like that but he went over.

"But give Birmingham full credit. Lee Clark's teams hardly give up. They are not having it easy and the season has not gone their way."