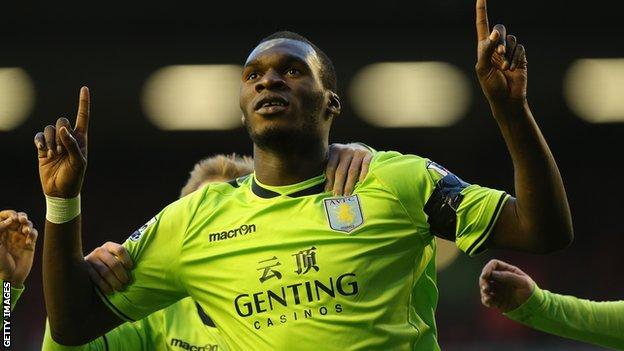 Liverpool were left stunned after their hopes of challenging for a top-four spot were hit by a loss to Aston Villa.

The home side went behind against the run of play when Christian Benteke arrowed a shot in off the post.

Benteke's backheel set up Andreas Weimann for Villa's second, before the Reds were denied a penalty when Ciaran Clark pulled Daniel Agger's shirt.

Benteke made it three from close range for a resurgent Villa before Steven Gerrard netted a late consolation goal.

It was a second defeat in 12 games for Liverpool and will serve as a reality check to their growing levels of optimism and expectancy that they might be able to launch an assault on the Champions League places.

Reds boss Brendan Rodgers had even claimed he was but those comments came back to haunt him after his side were beaten by an improving and youthful Villa, who extended their unbeaten league run to five games to move up to 14th place.

The Midlands side had reached the Capital One Cup semi-finals with a midweek win at Norwich and they translated that form to Anfield, with the finishing prowess of strike duo Benteke and Weimann showing Liverpool what they are missing.

Aston Villa's starting XI today was the youngest seen in the Premier League this season so far - they averaged 23 years, 309 days old.

The match had got under way following a minute's applause for former Liverpool captain and manager Phil Taylor, who passed away recently aged 95.

When the action did start, the home side were quickly given a wake-up call when Benteke headed a Barry Bannan free-kick straight at Reds keeper Pepe Reina.

Liverpool took this as the cue to take a grip of the game as they passed and probed for openings, although their lack of a clinical edge in the final third let them down.

This was epitomised when Luis Suarez could have put Gerrard clean through on goal, only for the Uruguayan to put his pass behind his captain's surging run.

Even though the ball was quickly worked back to Gerrard, he sent his 12-yard shot straight at keeper Brad Guzan.

Liverpool again had the Villa goal in sight when Suarez robbed left-back Chris Herd of possession before laying the ball off to Jonjo Shelvey, who had the ball cleared off his toes by a last-ditch Nathan Baker tackle.

Having provided a warning to the Merseysiders when Weimann had earlier broken clear before being shepherded wide and then tackled by Reina, Villa shocked their hosts after 29 minutes.

Brett Holman laid the ball off to Benteke and, afforded time and space, the Belgian fired a low 22-yard shot in off the post.

Weimann put an effort onto the roof of the net as he almost capitalised on Liverpool right-back Glen Johnson's poor back-header, before the Villa striker did extend his side's lead.

Weimann and Benteke beautifully combined and the latter's backheel allowed the former to sweep a shot past Reina.

Rodgers brought on Joe Cole for Shelvey at half-time and, while Liverpool had a decent claim for a penalty turned down for Clark's shirt-pulling of Agger, the home side rarely threatened a comeback.

Instead, Cole gave the ball away and Benteke waltzed through the gaping defence of the Merseysiders before slotting home a close-range shot.

Gerrard did find a way past Villa keeper Guzan with a header from Johnson's shot but it was too little, too late.

"We probably got punished for our decision-making in that first 20 minutes, we were a bit careless.

"We could easily have been 3-0 up in the game and if we do that we can control it much better but we didn't have that final pass and bit of quality at the top end of the field.

"Then we went on to concede some poor goals. We weren't quite at it today with our intensity and pressure in the game and they were a threat on the counter-attack and got the goals."

"The whole performance was fabulous. The goals were excellent, as was the way we defended.

"I thought we were excellent. The goals were brilliant, the second goal, with the movement and the backheel, especially.

"Benteke has been unbelievable while Andi Weimann knows where the goal is. He's a natural finisher. His enthusiasm and work ethic are second to none."