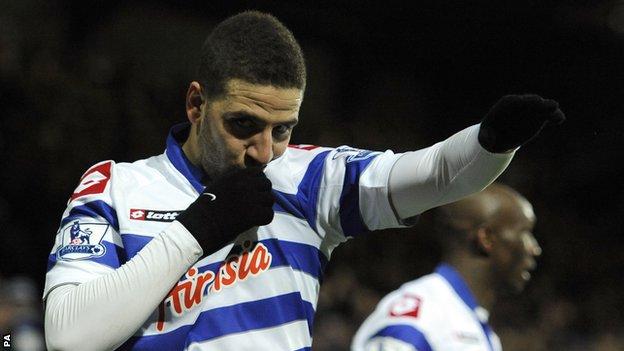 The playmaker opened the scoring with a shot from 25 yards that flicked off defender Brede Hangeland.

While the 23-year-old's first owed much to luck, his sensational second saw him nonchalantly curl the ball into the net following a mazy run from midfield.

The victory was their first of the campaign at the 17th time of asking, halting a run of three consecutive draws since Harry Redknapp took charge in November following the dismissal of Mark Hughes. It also moves them above Reading and off the bottom of the table for the first time since 10 November.

QPR started the brighter and could have gone ahead in the second minute after recalled striker Djibril Cisse was put through on goal following a glorious through ball from Taarabt.

The Frenchman's scuffed shot was saved easily by Mark Schwarzer, though he had room to complain to referee Martin Atkinson after his progress was impeded by a pull-back from defender Aaron Hughes.

That chance failed to wake Fulham from their stupor and their dozy start should have been punished when John Arne Riise played a blind pass back to Schwarzer, but Jamie Mackie somehow contrived to place wide from six yards when it looked easier to score.

A furious-looking Martin Jol watched on as his side's lack of concentration was to blame again when Chris Baird felled Stephane Mbia just outside the area following a loose pass from Hughes, but Cisse and Taarabt wasted the resulting free-kick.

The Dutchman's mood was not helped after the break when Fulham deservedly fell behind as Taarabt's run went unchecked. He broke from deep and hit a tame shot that, luckily for the hosts, took a hefty deflection off Hangeland and trickled into the net past the stranded Schwarzer.

Soon after, the error-strewn Baird was caught in possession just outside his own penalty box, but his mistake went unpunished as Cisse curled his shot just past Schwarzer's left post.

Taarabt was continuing to light up a match which was devoid of much inspiration elsewhere, and his stunning second goal saw him push through the gigantic figure of Hangeland before playfully flicking the top of the ball to create the space to slide in an unstoppable shot along the ground with the outside of his boot.

Fulham had not provided any attacking threat as strikers Dimitar Berbatov and Hugo Rodallega struggled to replicate the form they showed in Monday night's 2-1 victory against Newcastle United.

It was left to substitute Petric to finally find a way past Robert Green, his shot from outside the box looping off midfielder Alejandro Faurlin's boot and beyond the keeper's reach.

That moment of good fortune enticed the visitors to push on at the death, but they were unable to create an undeserved equaliser to deny QPR a vital three points.