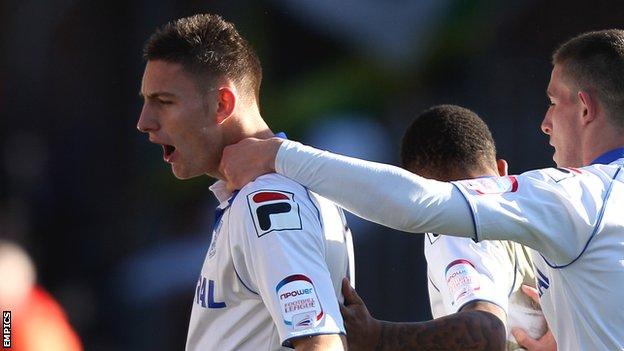 League One's top scorer Jake Cassidy has admitted he will be "gutted" to leave Tranmere as he prepares to return to parent club Wolves in January.

Manager Ronnie Moore had but

"I'm just hoping it will work out there, but I'll be gutted to leave this," he told BBC Radio Merseyside.

Jake Cassidy has 11 league goals to his credit this season and is the division's joint-top goalscorer, along with Scunthorpe United's Leon Clarke and David McGoldrick of Coventry City

"We [Rovers] are top of the league and games are coming thick and fast. We'll see what happens in the new year."

He added: "They've just told me to keep doing what I'm doing, and they're bringing me back in January to assess me even more."

In at Prenton Park, Cassidy has scored 16 times in 32 appearances, including 11 this season.

"The club's fantastic," he continued. "They've welcomed me both times and it's been brilliant for me. I've enjoyed every minute. I'm scoring goals, playing well and we're top of the league. You can't ask for any more.

"I've improved massively, as a player and as a person. On the pitch, I'm scoring goals and playing well, and off the field I'm improving as well. It's been good."

Wales Under-21 international Cassidy is yet to make a first-team appearance for Wolves since joining in 2010.

In November, Moore revealed that if Wolves choose to loan Cassidy out again, the League One leaders will have first option on re-signing him.