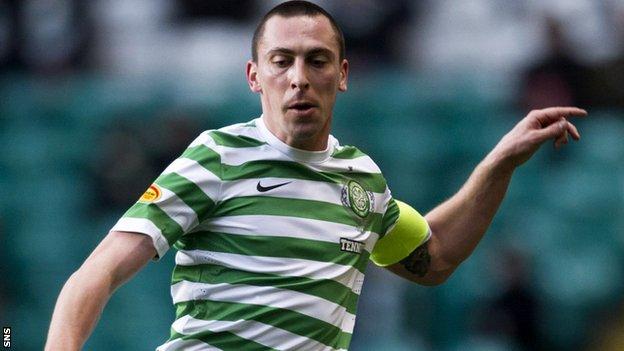 Celtic manager Neil Lennon thinks Scott Brown will eventually be forced to have surgery on a hip injury but admits he cannot force it on the midfielder.

Captain Brown has been troubled with the problem all season but played most of .

"He doesn't want to have surgery, so we're going to manage it," said Lennon.

"I can't force him to have surgery, but eventually the medical team think he will require it."

The hip injury has restricted Brown's appearances and his time on the park, as well as forcing him to withdraw from the Scotland squad.

But the 27-year-old has expressed his desire to keep playing despite having .

"He's feeling good and had a remarkably good game the other night," said Lennon.

"Training all the time will just keep him going."

Celtic winger Kris Commons was with a cut to his thigh after scoring the winning penalty.

Lennon reckons that, although the Scotland international will be missing for Saturday's Scottish Premier League meeting with Kilmarnock, Commons will return to action thereafter.

"The swelling has subsided significantly," he said. "I don't think he will be fit for the weekend but should be ok for following games."

Defender Mikael Lustig will also miss out with an injury picked up against the Russians and joins James Forrest, Miku, Paddy McCourt and Anthony Stokes on the treatment table.