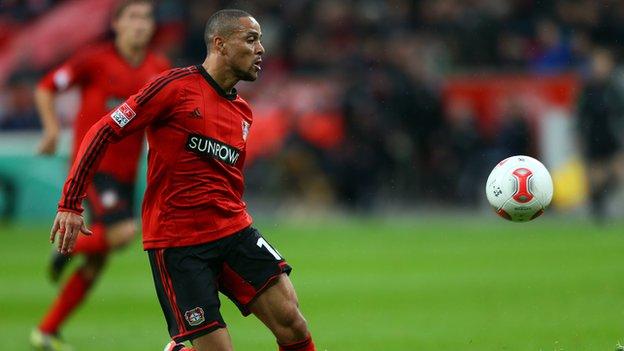 Nigeria coach Stephen Keshi has reiterated his desire to have former Germany youth international Sidney Sam in the Super Eagles side in March 2013.

Sam, 24, who plays for Bundesliga side Bayer Leverkusen, was born to a German mother but his father comes from Lagos.

He has not played for Germany at full international level, so is eligible to play for Nigeria - but he is waiting for world governing body to approve his nationality switch.

Sam has already been ruled out of the 2013 Africa Cup of Nations in South Africa, but Keshi is keen to have him available for the World Cup qualifier against Kenya.

"I've taken all the necessary steps to get Sidney Sam into the right frame of mind," Keshi told BBC Sport.

"I'm looking at the game against Kenya at home in March, it will be perfect to introduce him to our passionate fans on home soil - that's my desire.

"It's possible because the Nigerian Football Federation is also working hard to ensure he gets the needed clearance from Fifa.

"I know it might be a tough ask - considering our next game will be in June against the same opponent - so we remain optimistic.

"When you watch him play and see what he has to offer then you will understand why we want him to play for Nigeria.

"With that in mind, our immediate attention as a team shifts to the Nations Cup in South Africa."

Meanwhile, the Super Eagles are set to arrive in Faro, Portugal on the 27 December to prepare for the Nations Cup.

Officials are confident they will get key players available for the friendlies against Catalonia and Angola in January.