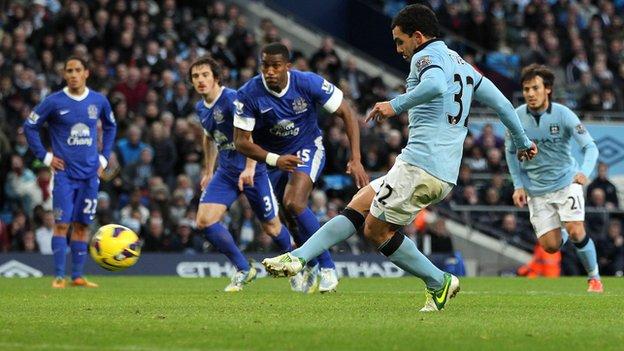 Sir Alex Ferguson has questioned the number of penalties rivals Manchester City are given at home.

Since the start of the 2010-11 season City have been awarded 20 Premier League spot-kicks at home to Manchester United's 13.

However, last season United were given nine penalties at Old Trafford - one more than their neighbours.

"If we got that number of penalty kicks there'd be an inquiry in the House of Commons," the United boss said.

Ferguson was speaking ahead of Sunday's Manchester derby at the Etihad Stadium, with his side three points ahead in first place.

Opta stats show that City have been awarded four penalties at home so far this Premier League season, scoring three. United have missed both of the two they have won at Old Trafford.

In the 2010-2011 Premier League season City were given six more home penalties than United, with a total of eight.

Ferguson believes the fight for this year's title is already a two-horse race between the Manchester clubs.

"It would be difficult to think the two of us would collapse and allow another team to get in so I think it will be between the two of us," he said.

"Derby games are notorious for surprises. City haven't lost for two years in it. It's going to be a hard game for us but we are capable of beating anyone."

City boss Roberto Mancini said United were favourites for the title, echoing last season's run-in when he repeatedly claimed the title race was "finished" with United on top until late April.

He said: "They are used to playing these games in the title race for 20 years. For this reason they have a small advantage.

"They are better than us at this moment."